It’s Hangover Thursday, how’s your head? I’m planning to do all my drinking this weekend, so my head is pretty clear this morning. So clear that we aren’t actually talking about alcohol today; instead we are going to talk about tea. Heresy I know. Outside of the occasional Chinese restaurant I don’t really drink tea. I might have two or three cups a year. Today I found something that makes me want to drink tea. 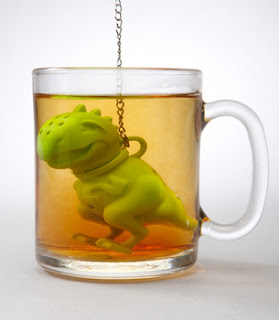 The Tea Rex is currently up for pre-order HERE. This little silicone dinosaur is made so that you can pop his head off and fill him with loose tea. Then you just drop him in your cup of hot water and let him do dinosaur-like things in there. I don’t know, slow lower him into the cup on his chain and imagine he’s actually in a tar pit. “Roar!” The mighty T-Rex struggles but it can’t escape! 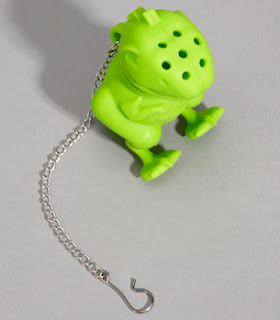 Anyway, the little guy will be shipping at the very end of February. If you want a tiny terror in your tea cup it’ll only cost you 14 bucks.
Posted by Ken O at 11:04 AM