It’s Hangover Thursday, how’s your head? The Christmas season is in full swing so I wanted to talk about a Christmas drink that you might not know about. The Tom and Jerry has been around since 1821, so it is not named after the cartoon cat and mouse. It was created by a writer named Pierce Egan who was trying to promote his book Life in Londo: or The Day and Night Scenes of Jerry Hawthorn Esq. and his Elegant Friend Corinthian Tom and the play Tom and Jerry, or Life in London. 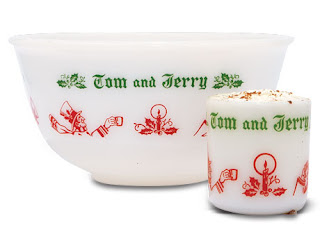 I want to emphasize that for just one moment, to promote his book and play he came up with a brand new drink. It actually became a really popular Christmas drink; obviously it lasted longer than Egan’s fame. It probably helped that he modified the existing Egg Nog recipe that was already popular. So what exactly is in it? Check out the full recipe below. 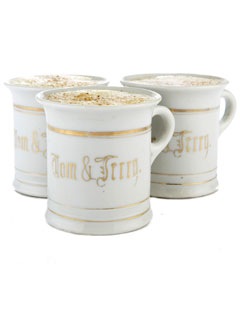 Beat sugar into the yolk.
Then add rum and egg white.
Transfer to coffee mug.
Fill with boiling water.
Add brandy and grated nutmeg
Posted by Ken O at 1:22 PM