The Behemoth has released their newest game on Xbox Live this week.  You may remember them from the super challenging game Alien Hominid and button mashing Castle Crashers.  The game is called BattleBlock Theater and it is every bit as quirky and fun as their other games. 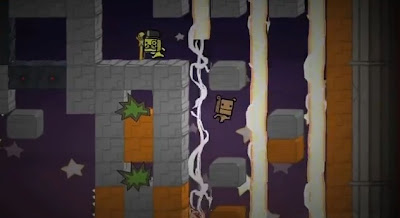 In BattleBlock Theater you are shipwrecked on an island, taken prisoner, and forced to complete levels in a theater run by cats.  The prison is run by cats too.  I told you it was quirky.  Each level is a platforming puzzle that requires you to collect gems as you search through the level to find the exit.  Each level also has a ball of string hidden somewhere.  Collecting gems will unlock more prisoners to play as and string can be traded in for different types of weapons.

The game can be played single player but really shines in co-op.  A number of areas are made easier by having a partner.  You can give the other player a boost or pull them up from a ledge.  You can also make it extremely hard to complete by spending all your time back stabbing each other.  Both options are tremendously fun. 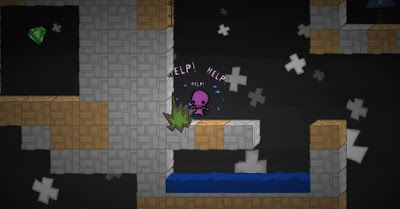 The art and music style are reminiscent of Behemoth’s earlier games.  To me there are good things.  You may not care for the blocky shapes and bugged out eyes as much as I do though.  If you already have Castle Crashers installed on your Xbox you’ll be getting a couple of extras too.  You’ll unlock a Castle Crasher prisoner to play in BattleBlock Theater.  Make sure you’ve got the latest Castle Crasher update, by getting a BattleBlock achievement you’ll unlock one of the BattleBlock characters in Castle Crashers!  Behemoth is awesome like that.
Posted by Ken O at 9:53 AM