Happy Flash Friday everyone!  I picked up the subject of this week’s Flash Friday a little while ago but every time I went to write about it something else exciting came up.  As a lifelong Flash fan I realize that Flash items are few and far between when compared to Superman and Batman.  Because of that I’m keeping an extra close eye on Flash merchandise aimed at children.  I want my son to be able to have his own Flash stuff.  I’m sure it won’t stop him from wanting to play with the things in dad’s glass display cases, but it can’t hurt. 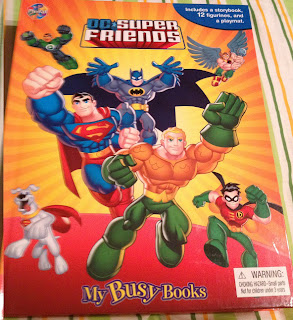 With this strategy in mind I realize I’ll be buying things when they are available even if they aren’t age appropriate.  I can’t chance seeing something on the shelf and hoping it will still be there in two or three years when my son is finally ready for it.  So I’ll buy them early, stash them away, and just surprise him with them when he’s old enough.  The first of these is the DC Super Friends Busy Book. 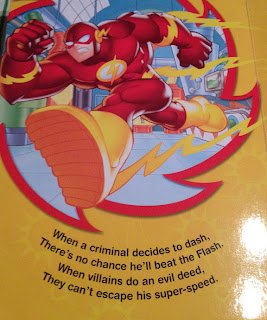 I ran into these and Barnes and Nobles.  It was on one of their center tables and marked down for 10 dollars.  There were Busy Books for all sorts of different licensed characters.  I picked up the Super Friend set and flipped through it to make sure the Flash was in.  Once I had seen that I knew it was coming home with us. 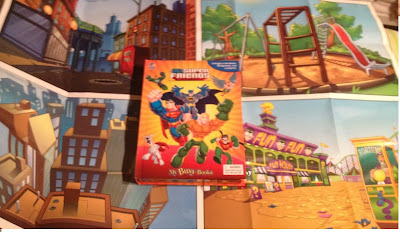 The Busy Book is a large book with about 10 pages.  They’re made of the thick cardboard type material used in kid books.  It’s glossy and has bright illustrations.  It also has a large box at the end of the book that contains a fold out play area and little figures.  What figures are included?  Of course it comes with Batman, Superman, and Robin.  To round out the Super Friends there is Flash, John Stewart Green Lantern, Aquaman, and Hawkman.  .  It’s surprising that Wonder Woman got left out here.  Instead of Wonder Woman we get an adorable little Krypto.  Of course you need villains so Lex Luthor, Joker, Penguin, and Riddler are thrown in 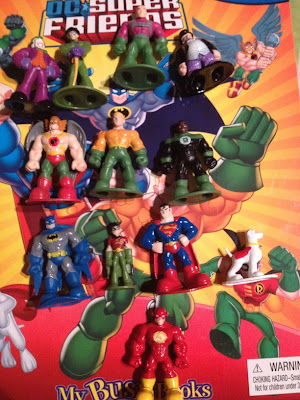 I can’t wait to see the play mat laid across the floor.  As I stated before, it’s too early for this set at the moment.  If I gave it to him now he’d enjoy turning the book’s pages.  The action figures would quickly go into his mouth.  Superman is tough, but I’m pretty sure he’d come out with some bite marks.  One day the Flash and Hawkman will defeat the Joker and Penguin at the abandoned carnival but for now the Busy Book will be up on the shelf until the time is right.
Posted by Ken O at 8:53 AM