When the first Transformer building sets came out I remember thinking to myself that they were okay, but I thought the mini-figures were far cooler than the Lego-like building blocks.  I didn’t worry about it too much because I had assumed they would stick more to the movie characters or the characters used on the latest cartoon.  I was wrong. 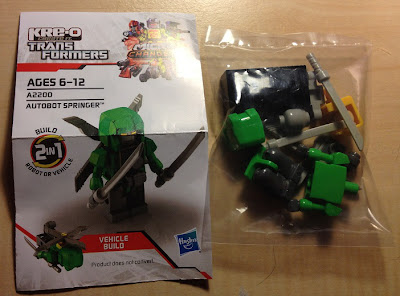 Kre-O realized how popular their Transformer mini-figures were and released a set of blind bagged characters.  I didn’t realize these were coming out, so I was surprised to see so many G1 favorites represented when I found them in the store.  As soon as I saw that the set contained Springer I knew I had to have one.  I didn’t want to test my luck though, so instead of grabbing a handful of the packages I went to eBay.  I won't lie, I was really tempted to buy a bunch of them and hope for the best. 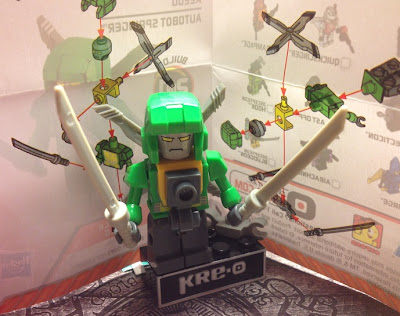 When I received my package from eBay it was still in the blind bag.  I don’t know how the seller knew it was Springer without opening the package; I think he must be a wizard.  Springer comes with two swords; a gun and a sword would have been more accurate.  The package says you can build a robot or a vehicle, but his helicopter mode just looks like the robot is laying face down.  So really this is something you want displayed in robot mode. 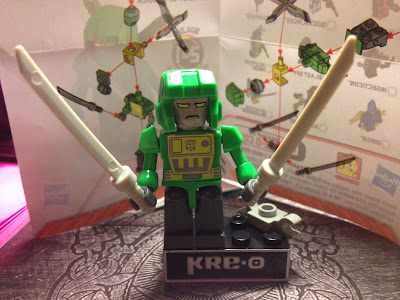 Springer looks better if you don’t use all the pieces he comes with.  There is a connector that fits over his chest that allows you to plug helicopter blades onto his back.  Doing so covers up the chest details that make him look more like Springer.  I get that Kre-O didn’t want you to have a handful of extra parts, but he looks so much better without all the extra blocks strapped to him.
Posted by Ken O at 8:08 AM