Flash Friday: DLC Among Us

Happy Flash Friday everyone!  I know we stumbled for a bit at the beginning of the year, but the Flash Friday updates are going strong again.  In fact I originally had a completely different update planned for today but a trip to the Xbox Live changed all of that.  So not only is there a Flash Friday for today, you are guaranteed one next week. 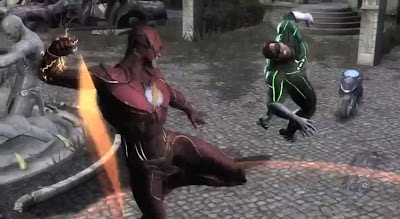 This week Injustice: Gods Among Us, the DC fighting game from the makers of Mortal Kombat, came out.  Despite the Flash being included on the fighting roster I didn’t pre-order this one.  I actually haven’t planned to pick it up at all.  A few years ago I had jumped on the Mortal Kombat vs DC game and was overwhelmed by mediocrity.  It wasn’t bad enough to hate and it wasn’t good enough to enjoy.  Unfortunately it’s because of that game I haven’t really been able to get excited about Injustice. 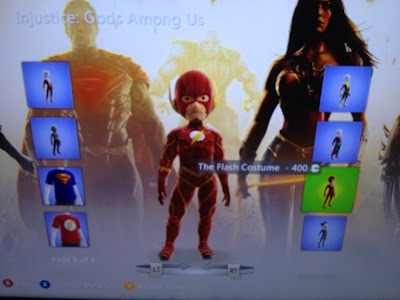 As I turned my Xbox on the other night to spend some time with the fantastic Battleblock Theater I was greeted with ads for Injustice that informed me that the game was now available.  Knowing how things work in Xbox land I quickly went to the avatar store to see if Injustice had its own extras.  I was not disappointed.  For 400 Microsoft points you can clad your avatar in the Injustice version of the Flash’s costume.  Unlike Batman who has 5 or 6 options to go with, this is the only Flash costume currently available on Xbox. 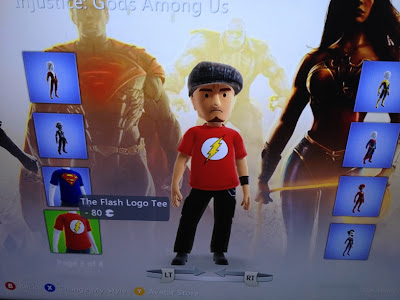 For 80 Microsoft points you can forgo the full costume and instead choose to rock the Flash T-Shirt.  I won’t lie, I picked this one up.  As I clicked to add the shirt my wife looked at the TV and said, “That’s scary, it looks just like you.”  That’s all I’ve got for you today, check out the Xbox Avatar store for more superhero goodness, and if you picked up Injustice let me know what you think about it.
Posted by Ken O at 8:32 AM