I’m still hard at work at getting my Dwarf Blood Bowl team and their stadium together.  Our Spring Training league starts the last Sunday of April so I still have some time but I know that there is no way I will be completely finished with all of my projects before the first game is played.  Who am I kidding; I probably won’t be completely finished until after Spring Training is over. 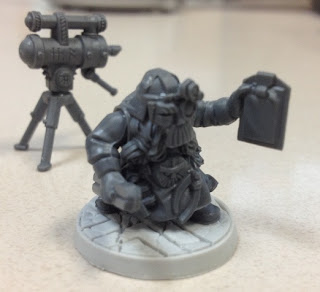 I’ve split my players and support staff into three groups.  The first group consists of the 11 players I’ll be fielding at the start of the league.  My next group will be things like my coach, turn counters, the runner I hope to purchase after a game or two, and my apothecary.  The third group is filled with the other ridiculous things I’ve purchased to support my team.  Picture above is my apothecary; I made him with bits out of the Dwarf Cannon/Organ gun set.  It took be forever to find a Dwarf doctor, so I’m really happy with him. 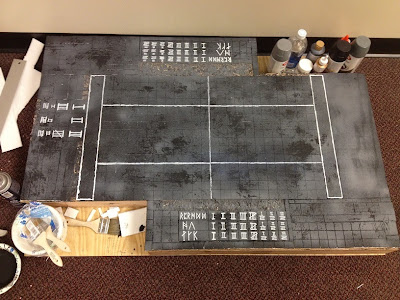 The stadium is another project that just keeps on growing.  I decided to use Klinkarhun, the Dwarven Runes for all the writing on my field.  I didn’t have much time last weekend but I still managed to finish most of the detail painting on the board.  I still needed to letter the end zones and get them fully painted.  I also need to finish painting the gravel pits.  I have sketched out my plans for my dugouts, but I haven’t bought the supplies I need to make them yet.  The best thing about the stadium right now is I could play a game on it if I wanted to.

You’ll notice the empty space below one of the end zones.  At this point I’ve decided to name my stadium “The Mountain”.  I have planned to put a mountain in that area.   So at this point I’m just making a ton more work for myself.  The good thing is that I’ll be using the same material that I’ll be using on my dug outs.  Still I need to get the supplies for all of that, so it’ll probably be a week or two before I have any more progress to show on that.
Posted by Ken O at 10:17 AM