Happy Flash Friday! As I posted earlier this week, all my plans on redoing my Flash display fell through when I found out the Detolf cases at Ikea are out of stock. Luckily there are still plenty of Flash related topics out there to talk about, including the Eaglemoss Professor Zoom figurine that arrived on my doorstep Wednesday evening. The Eaglemoss Gorilla Grodd I talked about recently had been out for a long time, Zoom on the other hand is one of their newest releases. 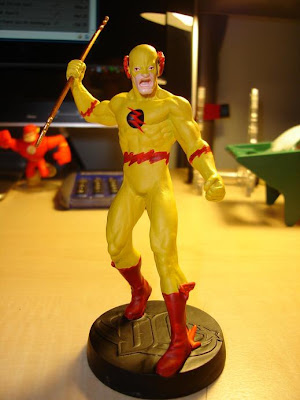 Incase you’re unfamiliar with Eaglemoss figures they are made of lead and hand painted. Zoom is no where near as heavy as Grodd was, but he still has some heft. When you pick him up you know you aren’t picking up plastic. The lightning pointer in his hand makes it very obvious he was sculpted after Flash Rebirth. It’s too bad for Eaglemoss that he hasn’t really used it since that series. The magazine he came with was extremely up to date too. It didn’t cover Flashpoint, but it did cover his most recent origin issue. 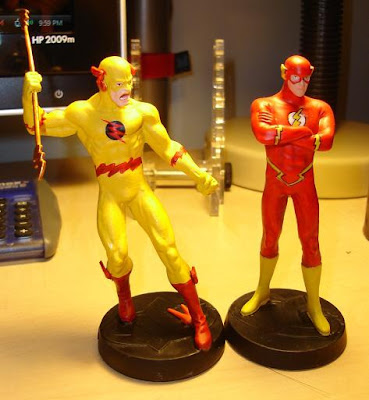 Ignoring the pointer for a moment, his pose is a pretty dramatic one. When you put him next to the Eaglemoss Wally you can also see that he is just a bit larger. I thought it was just the pose, but even the head on the Zoom figure is larger. You really have to study them side by side to notice it though. There is also a tiny bit of sculpting on the back of Zoom’s foot to make it look like he just rushed up at super speed. 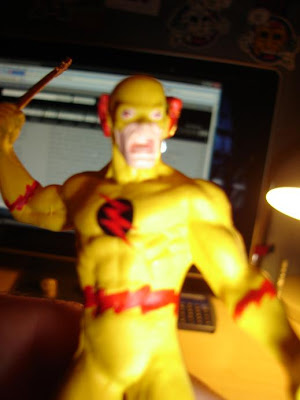 At this point the Eaglemoss Flash collection consists of Jay, Wally, Captain Cold, Gorilla Grodd, and now Professor Zoom. I won’t lie; I’m a big fan of the line. A Captain Boomerang is scheduled to be released in January.  The current rumor is that the series is going to end with its 100th release. Hopefully that isn’t the case, I can think of a lot more characters I’d like to see them tackle. The above picture was me hitting the button on the camera by mistake, but even with the blurriness it looked too evil not to include. 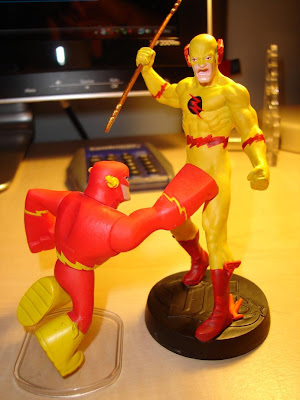 Oh yeah, it looks like we’ll be getting a new Flash related Action League two pack. This one will be Professor Zoom and Flash. I can’t wait. Until then…Kapow.
Posted by Ken O at 6:51 AM