There is a surprising amount of video game news coming out of SDCC this year. I don’t consider that a bad thing, I’m just a little surprised by it. The first night of the convention we were already getting new, incredible trailers for things like Arkham City and Saints Row: The Third. Then Microsoft has to go and release a new special edition of the Xbox 360. 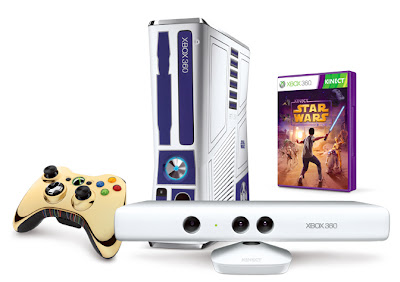 I’ve stated in the past that I have a weak spot for astromech droids and I have to say that the R2-D2 edition of the Xbox has me extremely tempted. Let me get the basics out of the way first. The bundle costs 450 dollars. It comes with the slim Xbox, a 320 gig hard drive, a gold C-3PO controller, a white Kinect sensor, the Kinect Adventures game, and the new Star Wars Kinect game. It is a lot of money, but currently the 250 gig hardrive/Kinect bundle is 400 dollars, so you’re getting another game and a bigger hard drive for that 50 dollar difference. If you’re looking to upgrade it is a great deal. 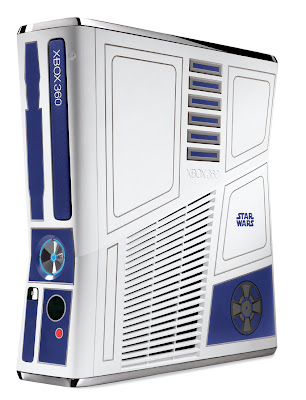 I’m really impressed with how they designed the console though. When I heard Star Wars Xbox I imagined pictures of Darth Vader plastered all over it; or the Star Wars logo covering every free inch. Instead they went really subtle with the R2 panel design. It looks fantastic. When the unit is powered on or the disc tray is opened it also makes R2 noises. Having just got the 250 gig/Kinect bundle at the start of this year I’m not really in position to upgrade right now, but I’m envious of anyone who jumps on this.
Posted by Ken O at 1:01 AM