Get your DVRs ready people; Sunday is the return of Shark Week! Discovery’s yearly love letter to the shark starts this Sunday. I’m a little disappointed that it doesn’t happen during my birthday again, but I’m just happy to watch some sharks. As always there are a handful of new shows and a new guest host. This year’s host is SNL/Lonely Island member Andy Samberg. The 7 new shows are listed below. 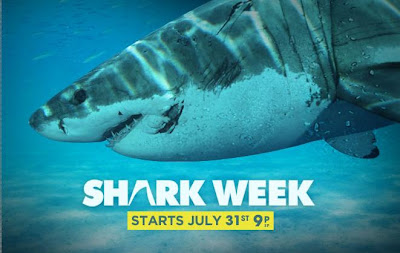 Sunday. Great White Invasion: Scientists are studying why Great Whites are appearing closer to shore then ever and in places they haven’t been seen before. Jaws Comes Home: Shark expert Greg Skomal documents a 1,200 mile migration of 5 great whites.

Monday. Rogue Sharks: A study of whether sharks can “go rogue” and develop a taste for human flesh. Summer of the Shark: Documents the Australian shark attacks in 08.

Wednesday. How Sharks Hunt: The guys from Dual Survival investigate the ways that different species hunt their prey.

That’s the new line-up. Much like last year it looks pretty heavy on the fear mongering and light on the conservation. That makes me sad. I understand that people want to see the big great whites taking people down in reenactments. I’ve probably watched Anatomy of a Shark Bite more times then it’s healthy to, but the important thing to remember here is that shark populations are in trouble. I just don’t know that Discovery is sending the right message anymore. I know that I'll watch all the new shows, hopefully they’ll prove me wrong.
Posted by Ken O at 6:11 AM