The subject matter of That F’ing Monkey is largely guided by my current obsessions. With that being said it is surprising that it has taken me this long to bring up the MMO Star Wars: The Old Republic. It might be because of the fantastic panels they held at SDCC. It might be because Bioware is claiming that Open Beta should happening in September. Regardless of the reason, the game is scheduled to be released this holiday season and we need to talk about the different editions. 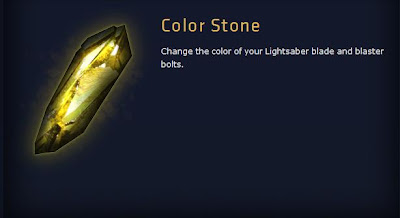 There are three versions of the game out there; the Standard, the Digital Deluxe, and the Collector’s Edition. Because we’re here to help, I’ll be going over what all of them include. The Standard Edition is available in both physical and downloadable versions. If you pre-order it you will get a gold Color Stone which will change the color of your blaster bolts/lightsaber to a yellow. After that you get early game access and 30 days of game time, nothing two out of the ordinary. 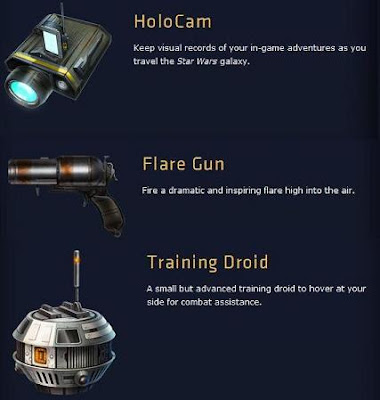 For 20 dollars more you can get the Digital Deluxe Edition. As the name states this is a downloadable version only, so you won’t be seeing this on the store shelves. You’ll have to go to the EA/Origin store to order this one. It includes all of the items the Standard Edition has and then throws in 5 additional digital items.

Those items are a Flare Gun, Training Droid, HoloDancer, HoloCam, and STAP. With my limited MMO experience I’m going to predict that the STAP will probably be the most useful. Running back and forth across huge zones can be tiring and anything that can speed that process up will be greatly appreciated. Also since I plan on starting the game playing a smuggler I really like the HoloDancer. Given the option I’d have it installed on the control panel of his starship, like one of those little hula girls.

We aren’t done yet though. There is the already hard to get Collector’s Edition. 150 bucks will get you everything in the Standard and Deluxe Editions. It will also get you a Darth Malgus statue, a metal case to put the game in, a Journal, galaxy map, authentication key fob, and a music CD. In game rewards consist of an exclusive mouse droid, access to an in game VIP club, and a store only available to those with the CE.

That’s it for the Edition breakdown. As we get closer to Beta and release date expect to see more Old Republic news here. Did you pre-order? If so what version?
Posted by Ken O at 6:50 AM