Just when you were distracted with holiday weekends and court trials, Tales of the Brain Jar is back!  We are taking another look back into my brain jar filled sketchbook. Today’s sketch was done by Jeremy Haun at the FX convention back in 08.


Jeremy did this sketch of Mid-Nite Hour for me, a character from the Image mini-series Battle Hymn. The series was B. Clay Moore with Jeremy doing the pencils. If you haven’t read Battle Hymn, it’s a story mixing superheroes, the government, and World War II. Every review of it I’ve read brings up parallels to Watchman, The Golden Age, and Ultimates; and I see that to a point. It is a darker more realistic look at politics and superheroes; everything is colored in shades of grey. That being said I think Battle Hymn stands on its own and is worth tracking down.  In fact I just read it again last night and am still impressed with the story. 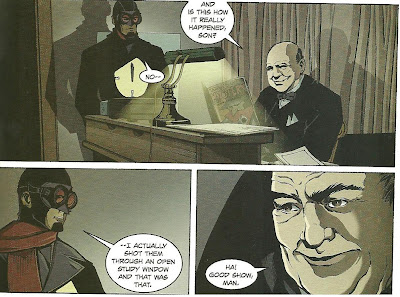 Mid-Nite Hour looks a little bit like the Hellboy pulp hero Lobster Johnson. The trade paperback that collects the story actually mentions this. Mid-Nite Hour existed for a long time before the Battle Hymn book and went through a few different costumes.  I can only imagine the horror of having designed a character only to see his spitting image show up in another comic book. Regardless of that, Mid-Nite Hour was my favorite character from Battle Hymn so I was thrilled to have Jeremy do a sketch of him. 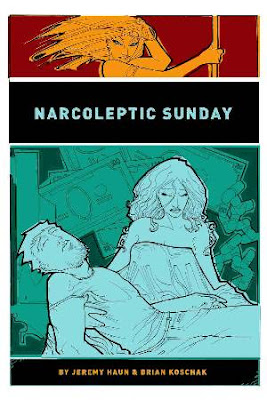 If you read the Heroes Con interviews you’ll remember that we talked to Jeremy. He is working with Top Cow doing art duties on Artifacts and will be working on the Darkness. We should be seeing his Pilot Season project announced around SDCC. Jeremy is also a writer. I’d highly recommend his book Narcoleptic Sunday.  I really can't say what it is about without giving it away, it is one of those kinds of stories.
Posted by Ken O at 6:08 AM