You need to be reading The Abominable Charles Christopher. Really I could just end the blog post with that today. Karl Kerschal’s web comic is that good. The story alternates from Charles’ journey to the every day lives of the other creatures of the forest. It updates every Wednesday and is one of the first things I check for on Wednesday mornings.

What’s so amazing about Abominable?
Check out after the jump.

Karl’s art is simply amazing. It is hard to describe how deep and realistic his forest looks. The dim-witted protagonist, Charles will grow on you. I promise. I wasn't sure what to think of him at first, but now I think he is wonderful.  While they don’t get equal billing in the title, the other animals are just as important as Charles. The drunken father bird, the love struck rabbit, and a role-playing porcupine are just some of the animals whose lives you’ll get involved with. Really, there is a police corruption storyline going on in the middle of all this too.  Of couse the cops are wolves, but still.  The comic above this is my personal favorite, to the point that I ordered a print of it and have it framed in my bedroom. 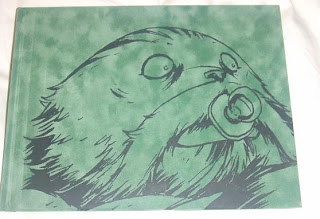 I’m also very happy to tell you that if you prefer to read your comics in book form, the first volume of Charles Christopher has just been released. Inside the embossed, faux suede hardcover is the first two years of the web comic. The book is 144 pages and has a giant gatefold picture that unfolds at the back of the book. Do I sound like an infomercial? I can live with that, because this should be on your bookshelf. It’ll only set you back 40 bucks. It’s made in Germany and you know the German’s always make good stuff. Okay, the last line is about the Shamwow not Charles Christopher. I was lucky enough to order a Master Edition, which means I got a sketch from Karl on the inside of my book. Since each sketch was different I figured I’d show mine off. When I opened the cover I thought it was printed on the page. Obviously I’m very happy. So go check out the Abominable Charles Christopher; just don’t blame me if it makes you cry.
http://www.abominable.cc/
Posted by Ken O at 12:03 PM