I had something else planned for today when in his blog, Michael May made the comment, “Asking me my favorite flower is a little like asking me who my favorite Ewok is. I really don't think about them enough to have a preference.” I threw out a reply that said Paploo was my favorite Ewok. I wasn’t even joking either. I knew that name off the top of my head. So I wanna talk Ewoks today. Sure I know that long before the prequels that Ewoks were the thing that all the cool Star Wars kids hated. But I like Ewoks and I’ll tell you why.  Maybe I'll change your mind too. 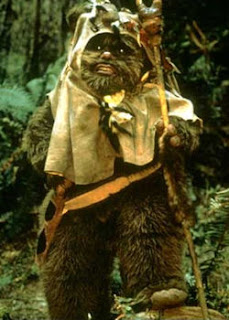 More yub-yubing after the jump. 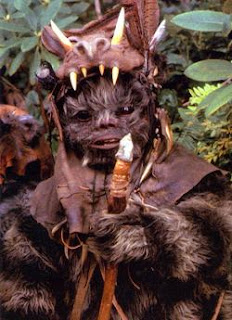 Yes, yes I know what you’re thinking. Sure we hate Jar-Jar more, but Ewoks suck. I know that from a distance that they look like little teddy bears. But look closer at those faces; look at those crazy ass chiclet teeth and black soulless eyes. If Jaws was made later Quint would liken a shark's black, soulless eyes to that of an Ewok.  If you woke up and one of those things were staring you in the face you’d be scared shitless. 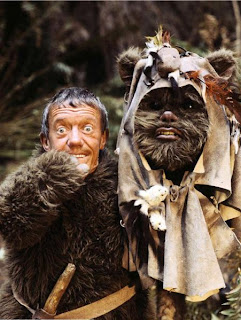 Now let’s talk about their building skills. One minute they are having a cook-out the next minute they are wheeling out hang gliders and siege weaponry. Seriously, they put together a catapult quicker then the A-Team could put together a cabbage head launching cannon. They didn’t even need a montage to do it, it was all "take the meat off the spit and grab the battering rams".

The last and possibly the most overlook point of Ewok awesomeness, they eat people. Seriously, all the heroes were about to be pit barbeque. They have Stormtrooper helmets to use as drums. Where do you think they came from? I can just imagine Ewoks throwing troopers into boiling water and eating them like crab.  At the base of thier trees are huge piles of bones and white armor pieces. 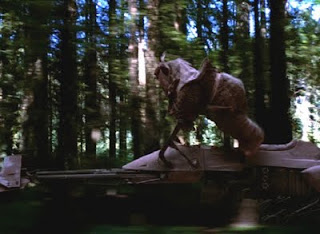 Then we get to Paploo. Little guy stole a Speederbike. There are countless back stories about him but I don’t want to know any of them. I like him for his 15 seconds of fame. It makes me wish that Lucasfilm and Rockstar would team up for a video game. You play Paploo stealing Speederbikes and AT-STs. When your health is low, no problem, eat a Stormtrooper. It’ll never happen of course, but dreaming about it makes me happy.
Posted by Ken O at 1:35 PM