Flash Friday continues! There was some discussion about Marc Guggenheim with the recent announcement and it got me thinking about his take on the Flash. Some background information for those not in the know. Flash: Fastest Man Alive arrived in June of 06 and starred an aged Bart Allen. The book started out being written by Danny Bilson and Paul DeMeo. There were giant changes. Wally’s family was still missing with little to no explanation why. Bart’s new attitude was dark and moody. I think most of it came from editorial, so I don’t blame Bilson and DeMeo, but the new series did not start off well received. 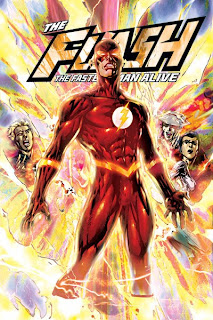 Marc Guggenheim came in next. He moved Bart out to LA and had him training at the Police Academy. It turned me around. I was really enjoying the book again. I liked where the book was headed. And then they killed Bart. I was picking up the Flash monthly when Bart first appeared, I picked up his solo book, I bought Young Justice originally just for Bart. I’ll admit it here, those last couple pages of Fastest Man Alive hurt.

So after all that, what Flashness do I have to show you? Check it out after the jump. 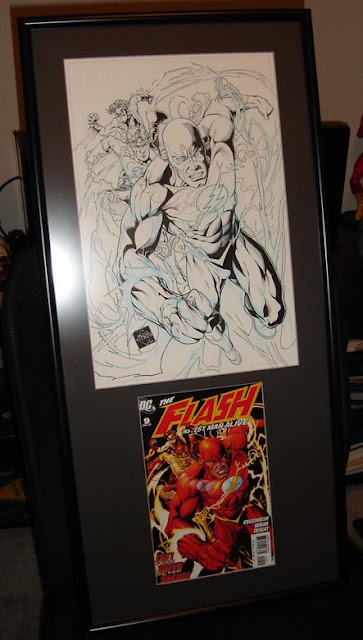 One of the highlights of my collection; the original art for the cover of Flash: Fastest Man Alive 9. The story behind this is pretty awesome. When it was announced that Ethan Van Scriver was going to be doing covers for the Flash I teased him that he would be returning to the Flash just when I was too broke to purchase anything. I was going to be getting married soon so I didn’t have the cash for things like art. My wife went behind my back and bought the art for me. As you can see it makes a fantastic present. 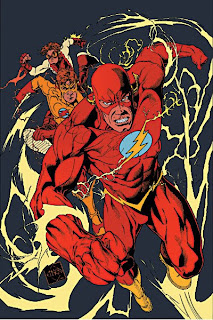 I love this cover. Not just because I own it either. Ethan actually worked on the Impulse book, so he was a perfect artist to have Bart in all of his costumes. An interesting note, the background wasn’t supposed to be a dull flat color. It was actually supposed to be a red spiraling mass like a black hole or something. It looked much better then the background DC added. Bart is back to being Kid Flash, so even though he is no longer the Flash I still love this cover. Come back next week and I’ll share some more Impulsiveness that I just picked up.
Posted by Ken O at 9:14 AM