Flash Fridays continues at That Fing Monkey. Last week we started looking at a few items in my collection that you can’t just buy off the shelf. Because these are all projects worked on by either friends or family I’m doing the countdown chronologically. This way I don’t have to pick a favorite. Which is good because, I’m not sure I’d be able to, even if I was pressed. 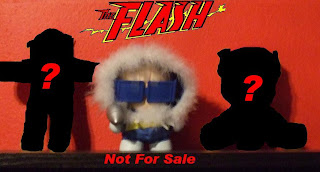 The first entry in NFS was the Captain Cold Munny that my wife and I worked on. She did all the sewing, so her skills really shine on him. I did all the paint. So who is the second entry?
Number 2 is revealed after the jump. 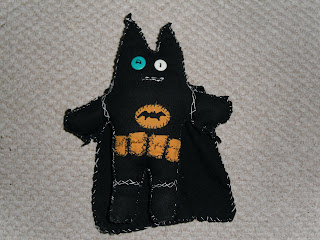 The story starts a few years ago on the Steve Niles forums. Amongst all the horror talk and other randomness on the site there were pictures of this little guy, BatRag. He was stitched together by a board member named Sophie for her man, DeAndre. But Soph didn’t stop there. BatRag got his own Rag rogues gallery, and they were awesome. 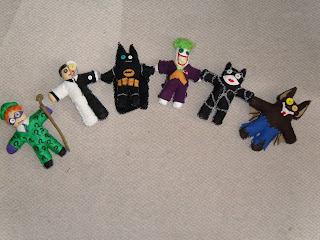 I was hooked and so was a good portion of the board. Luckily for me, the interest from the board prompted Soph to accept commissions. Considering today is Flash Friday, I don’t think it will be hard to guess who I asked for. 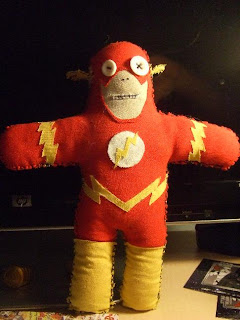 So I proudly introduce to you, FlashRag. Look at those eyes; I love the fact that the buttons aren’t the same size. It is probably my favorite part of him. The mismatched eyes, the thick stitching, and the crooked line makes him look like the Flash viewed through a Tim Burton-ish filter. Like he’d being hanging out in the background of Halloween town or be one of those toys that Jack delievered. Also imagining him running with his arms stretched out that way makes me laugh. 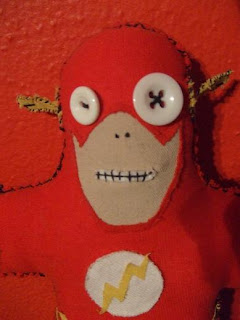 I don’t know what it is, but I can’t look at that face and not smile. He’s got the white eyes and the v-shaped belt, so if you wanted to classify him, he’d be Wally. Somehow in my mind FlashRag is his own entity, like a Bizzaro or Batmite. Who knows, maybe FlashRag got his powers from Mopee. 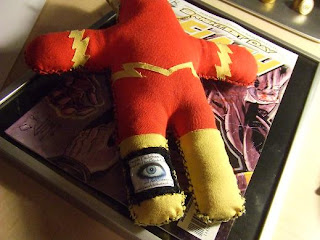 One of the other little flourishes is that Soph put her own label on his leg! I’d have shown a more detailed shot, but it has some personal info like email and such. To steal from her, it is pure Yayness. 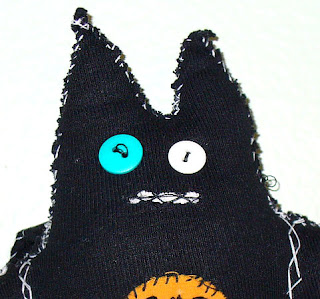 All of the BatRag photos were sent to me pretty last minute by DeAndre and Soph; a kick ass couple if there ever was one. So this one is pretty much dedicated to you two.

Next week I’ll have the last installment of my Not For Sale collection, hope to see you then.
Posted by Ken O at 10:08 AM