It has been all over the internet this week, but incase you haven’t heard about it, Wonder Woman is getting a new costume. Predictably the message boards and blogs are gathering pitchforks and torches so they can storm the DC Castle. I like the new costume, but my opinion of it probably doesn’t matter much. While she may be in some of the collected editions I have, I don’t own a single Wonder Woman trade paperback. I’ve only bought 2 issues of Wonder Women ever and those were because of a crossover with the Flash. So I am a far cry from being a die hard Wonder Woman fan.

I’m also not too worried about the change. Just look at the Justice League’s big seven; they’ve all been through some changes.
To see what I mean check out the rest of the costumes after the jump. 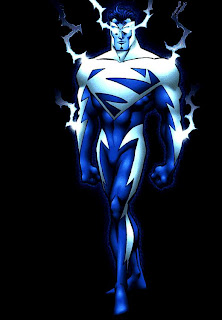 I think probably one of the biggest and best know changes was the switch to Superman Blue. In 1998 Superman developed electrical powers and had to wear a containment suit. He then spilt into a Red twin. So there was two of him running around. He turned back to the Superman you remember in the Summer of 98, right around the 50th anniversary of Action Comics #1. Imagine that. 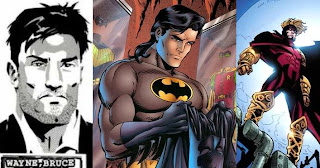 For the most part Batman keeps his costume the same. Maybe switches black for blue or ovaled bat for no oval. Except for when his back was broken and it wasn’t even him in the suit. I was about to put up a picture of that crazy looking batsuit when I realized there have been at least three people operating as Batman. Bruce, Dick, and Jean Paul have all been Batman. 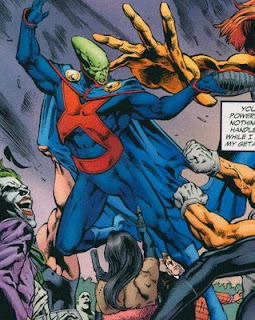 Martian Manhunter is in serious need of a new costume. He is such a great character and he has a goofy costume. So a new costume can only make him look better right? Ugh no. Thankfully it looks like this look stayed dead, since when MM returned from the dead he is wearing his old duds.

I was going to talk about Aquaman’s short lived blue camouflage costume, because I have some unexplainable fondness for it. But that wasn’t as large a departure from the norm as ditching the clean cut look and orange shirt for the underwater Viking look. Let’s see, grow out hair and beard, lose the shirt, add armor, and replace hand with hook. It is a pretty drastic change and it stuck around for a long time. 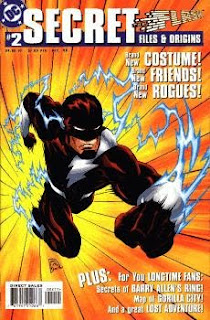 I could go a few different ways with the Flash. Jay, Barry, Wally, Bart, John, and Walter have all been or still are the Flash. So there have been plenty of people with that name. The Barry to Wally costume is pretty similar even if there are changes. So I’m going with my favorite Flash costume ever, the Dark Flash. Wally disappears and the Dark Flash takes his place. He only unmasks himself to a few people to gain their trust. When the issues were coming out it was painful to wait each month to find out who he was. I was actually hoping Wally would adopt this look when Barry came back.

Green Lantern is another one with a few ways to go. Just looking at Justice League membership we’ve had Hal, John, Guy, Kyle, and Kilowog. Kyle Rayner has had so many costume changes that we could probably dedicate an entire blog just to the ones he has worn.

So that is a brief look at just some of the changes the Justice League’s big 7 have had. If your soul has been crushed by Wonder Woman's change, comics are a cyclical thing, I’m sure the old look will be back at some point. Meanwhile I’m going to try and find someone complaining about Wonder Woman who actually reads her book. I haven’t found anyone that does yet.
Posted by Ken O at 1:35 PM

Email ThisBlogThis!Share to TwitterShare to FacebookShare to Pinterest
Labels: Comics