This weekend I had to make a trip to the local Hallmark store. Why the big rush? A good portion of the Christmas ornaments were released this weekend. Now normally, this would not a big deal. I’m a little more into Halloween then Christmas, but this year Hallmark had something that I felt my soul was lacking.

For the past couple years Hallmark has been releasing Muppet ornaments. Two years ago they put out an amazing Statler and Waldorff sitting in their balcony. Press a button and they rotate through about five different sayings. Last year was Swedish Chef. The Chef is near and dear to many people’s hearts, but I’ve never been a big fan, so I skipped it. This year though is Animal!! 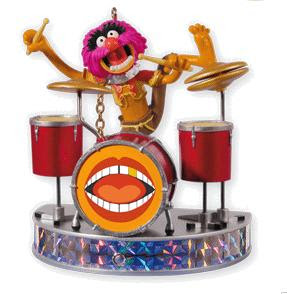 Animal is sitting at his drum set, which has a great Dr. Teeth image on the bass drum. Press the button on the base and you hear him drumming away and yelling along. The speaker isn’t as loud as the one on my Statler and Waldorff unfortunately, but it sounds great anyway. I’m a giant Muppet fan and Animal has always been my favorite. I was so worried about this thing selling out I bought a Christmas ornament in July. I’ve barely got time to even post this today, so somewhere down the line I’ll write up something about my love for the spastic drummer and some of the Animal related items I’ve had over the years.

Extra points go to those who got the Renoir reference...
Posted by Ken O at 11:51 AM