There are a lot of shark movies out there; to my knowledge there is only one movie with a 2-headed shark. Now I very strongly believe that sharks are not monsters and we really need to step up our conservation efforts to save them. That being said, I love a shark attack movie. Good, bad, or silly; I will watch them all. So months ago when I heard about 2-Headed Shark Attack I knew I had to see it. It took a little while for me to do so, the movie came out on Blu-Ray on January 31st. Honestly I knew I wanted to see it, I just wasn’t sure if it was worth 20 bucks. Thankfully this movie is currently on Netflix. 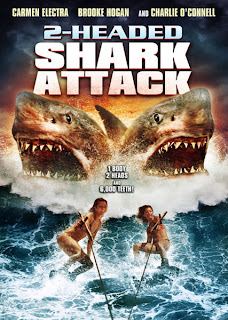 The movie centers on a Semester at Sea school group that is attacked by a 2-headed shark. At the start of the movie their ship, the Sea King, runs into a dead shark. The dead shark slams into the bottom of the boat and destroys the propellers. The 2-headed shark also is attacking the boat and manages to break the radio antenna. Honestly I re-watched this sequence a few times. What exactly is happening and why is very hard to figure out. End result is that the Sea King is stranded, taking on water, and has no way to contact the rest of the world. 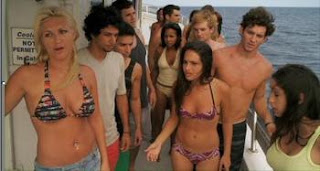 The man in charge of the expedition is Professor Babish; who is played by Bachelor star and brother of Jerry O’Connell, Charlie O’Connell. The Professor wants to ferry all the kids over to the atoll while his co-captain and crew make repairs to the Sea King. His wife, played by Carmen Electra, doesn’t like the idea and plans to stay on the Sea King. Because of this, Carmen spends the first third of the movie sunbathing on the ship. Among the 15 students is Brooke Hogan. 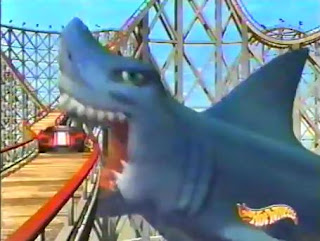 We have to talk about the shark now. There are no grand science experiments or secret weapon testing in this one, the 2-headed shark is just a freak of nature that somehow survived in nature. Because it has two heads, it is also doubly sensitive electric current in the water. This is the reasoning for it attacking boat motors and things like that. It does not explain how it can eat 20+ people in an hour and still be hungry. The CGI is extremely un-even. Some shots are fairly well done; then there are times where the shark in the HotWheels commercial looks more realistic. 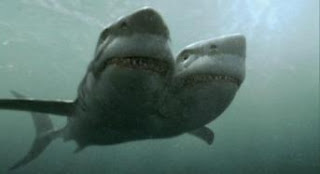 All of the things you would expect to happen here happen. The co-captain trying to make repairs to the boat is eaten. Three teens go “skinny dipping” and are eaten. They call it skinny dipping, but if you’re only topless can you really call it that? Actually almost everyone in this one gets eaten. The body count is pretty massive. The attacks are usually set up so the shark can kill two people at the same time; although there are a few times when one person is ripped apart by both heads. 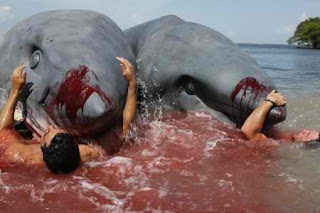 So after all of that, how is it? This is an Asylum movie through and through; bad special effects, laughable premise, and bad actors. If you don’t like the Sci-Fi Channel’s original movies you aren’t going to like this. I had a good time with this one, mainly because it kept getting more and more absurd. This is a rental though, I can’t really say it is one I need to own. Grab it from Netflix and watch with some friends.
Posted by Ken O at 1:22 PM