Happy Flash Friday everyone! I’ve been meaning to talk about today’s topic for a while now, but Peterson gave me a much needed kick in the ass last week! This week I have two sets of Action League figures to talk about. I was actually been keeping them in package until I was ready to take pictures, so last night was some box ripping fun. The two sets are a Flash/Zoom and the Flashpoint Flash/Citizen Cold. For the rest of the article I’ll be calling him Captain Cold, I don’t think there is any need to dwell on the Flashpoint part. 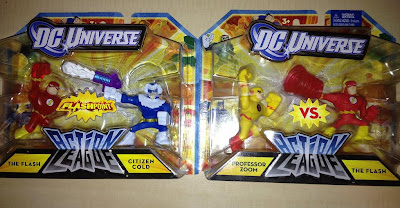 I’ve already talked about how much I love the Action League line. The first Flash has never left my desk, unless I’m taking pictures of him punching things. The think I don’t like is how inconsistent the line is. I found the Flash/Zoom line randomly in a Toys R Us one day long after the line was supposed to be launched. For the Flash/Cold set I broke down and picked it up off eBay.

The new figures in the line are much like the ones that came before them. They turn at the neck and waist and at the shoulders. They are stylistically posed, so even though you can move the arms there may not be many poses that you can put to figure in. How stable the figure is also depends on the pose. The “running Flash” sculpt actually comes with a figure stand, I wish the Captain Cold did. 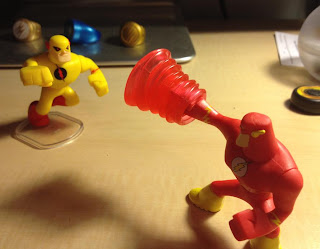 In the Zoom/Flash set we have a brand new Flash sculpt. Flash comes with a tornado accessory that slides over his fist. The Professor Zoom uses the original Flash sculpt, the one I like to call “running Flash.” The back of the box had a strange background blurb. “A longstanding enemy of the Flash, Professor Zoom fulfilled a prophecy when he saved his foe from the Speed Force.” I’d have put something easy for the kids to understand like, “Professor Zoom is from the far future and travels back in time to battle the Flash.” 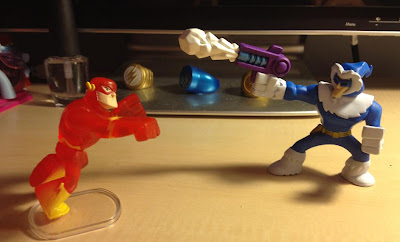 The Cold/Flash set also uses the “running Flash” sculpt. This time he is made out of a translucent red plastic to better signify…yeah I don’t know. Maybe he’s vibrating his molecules really quickly? I have no idea. Someone probably thought it looked ‘kewl.” Captain Cold is a new sculpt though. The ice shooting from his gun is not removable, so getting him to stand can be a balancing act until you get his pose just right. That is a minor complaint though, the figure looks great. 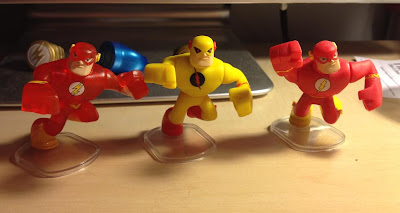 Not everyone likes the Action League line. I personally love them. I want more Flash sets. I don’t know that I want any more of the “running Flash” pose. When three of the figures in the display have the exact same sculpt it starts to show. Again, this is a very small gripe though. If each set with a newly sculpted Flash villain and another “running Flash” I’d still buy them. 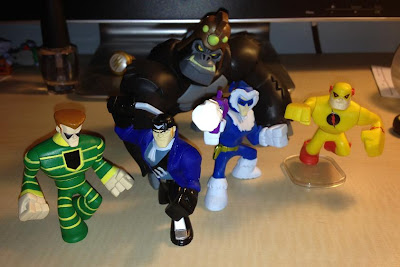 If you include the Action League figures from the Batman Brave and the Bold show Flash starts to have a pretty formidable group of enemies. I know not all the characters in the group shot would normally work together, they still look good together. Besides, we still need to be impressed they actually made a Top figure. Now we just need Mirror Master, Weather Wizard, Trickster, Piper, etc… 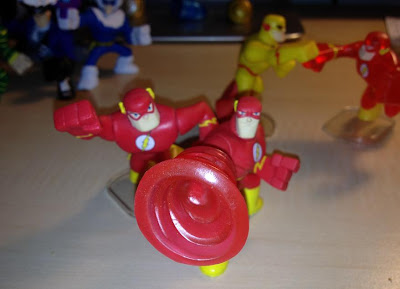 I think the strangest thing about the two Flash sculpts is how different the heads are. The “running Flash” head is rounder and thicker. The “tornado Flash” has a longer, thinner head. If you have to call one Barry and one Wally, it would be very easy to call them two different characters.