It’s been months since I ran a Tales from the Brain Jar. For those who don’t remember I have a sketch book with a brain jar theme. I’ve been very lucky to get some amazing sketches from a number of talented artists. Because I’m pretty proud of the book I like to show it off and hopefully let people know about some books that they may have missed. Today’s sketch comes from Francesco Francavilla. 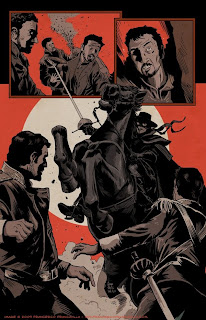 I met Francesco back when I used to be a regular member of the Hellboy boards a very long time ago. I was obviously impressed with his art. I finally met him in person at Heroes Con in 08. He was working on Zorro and showing off pages from Dracula Meets the Wolf Man (written by Steve Niles).  There was a large group of us who stayed up way too late talking about break dancing, Robocop, and every once in a while, comic books. I may have gotten really drunk.  That weekend I pretty much begged him to come to Megacon just so I could hang out with him again. I also really wanted him to do a Zorro in my sketchbook, but I had run out of time at Heroes and his list had filled up.

This sketch was done at the Megacon mentioned above. During the convention I went to a Pulp Hero panel that had Francesco , Sergio Cariello (Lone Ranger artist), and a writer who was working on Green Hornet prose. I apologize I don’t remember the name of the Green Hornet writer. The panel had a horrible turn out because it was scheduled against a massive Leonard Nemoy panel. I still remember saying how surprised I was that both Lone Ranger and Zorro comic started by retelling the origins. I had though everyone knew those stories, but when the room (of like 6 people) was polled I was the only one already familiar with those stories. 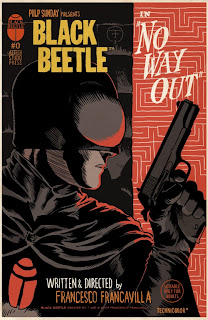 I love the Zorro sketch, but now that Francesco has his own character I would love to get a Black Beetle sketch some day. Also make sure you check out Francesco’s Pulp Sunday blog for more of his amazing art work.