Back to Blood Bowl

I originally got into Warhammer 40K when I was in High School. I painted a lot of miniatures before I really started playing the game though. It took me a while I found out someone else I knew played. I then joined that person’s group of 3 other players. My close friends never got into it though. It might have been the setting, or the cost, or all that painting. Whatever the reason was, all of that changed when the third edition of Blood Bowl came out. 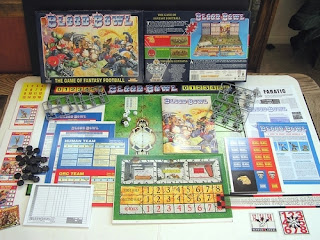 Blood Bowl is a fantasy version of football played by al the races of Warhammer. As the name implies, it gets pretty brutal. Depending on the team you’re playing it is not uncommon to see players badly injured or killed while playing. Wizards cast spells from the sidelines, players sneak weapons on the field, and sometimes people remember there is a ball that needs to get into the end zone. My friends and I played Blood Bowl a lot.

I just recently returned to Blood Bowl thanks to Steam and the Blood Bowl Legendary edition. While back in third edition I grew extremely proficient with a Dark Elf team, I’ve opted to learning how to manage a Dwarf team. Sure I can’t dodge past three attackers and launch a ball down the field anymore. I won’t lie, I do miss that. But as fun as that was, it is just as fun to end a turn the majority of the opposing team on their asses. 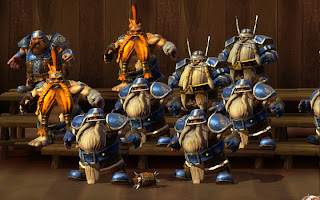 Games Workshop still sells Blood Bowl in the specialty shop on their website and there is a strong third party market out there making “Fantasy Football” figures. I’m holding hope in my heart that the line gets revamped at some point in the near future. New team sculpts in plastic to replace the old metal minis would have me throwing money at GW.