Happy Flash Friday everyone! Recently I started thinking about 80s cereals for some reason. I don’t really know why; it wasn’t morning, I wasn’t eating cereal at the time. During the 80s it seemed like every cartoon and big kids property ended up with its own cereal. C3POs is a pretty well known one. I still miss the Teenage Mutant Ninja Turtle cereal. It was then that I thought to myself there should have been a Flash cereal.

It will come as no surprise to anyone that Batman has had multiple cereals. The first cereal based on his movie was absolutely bland. Tiny, mostly flavorless bat shapes the consistence of Cap’n Crunch. Batman Returns was marshmallows and chex-type squares. The last Batman cereal I know about was based on The Batman cartoon; cocoa cereal with marshmallows. At least it started looking dark near the end. 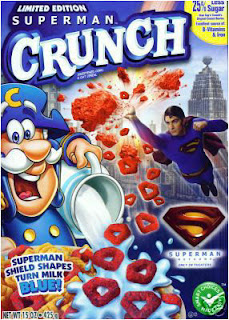 Batman wasn’t alone thought. Superman even got his own limited edition of Cap’n Crunch with Superman Crunch. They had the superpower of turning the milk blue. I’ve never really thought of that as a selling point, I had two bowls of Boo Berry this morning that did the exact same thing. Yes, I’ve hoarded so much Boo Berry that I still have a couple boxes left. 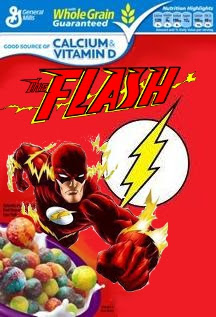 So what would Flash cereal be? You certainly can’t turn milk red; that would be a very bad thing. At first I was thinking you could have cereal lightning bolts and marshmallows to represent the Rogues weapons. That doesn’t really work. Weather Wizard’s wand would just like a long thin marshmallow and all the guns would probably just look like blobs. That and I doubt any parent is going to be buying cereal full of marshmallow guns. I think the best would be cinnamon flavored circles and marshmallow lightning bolts.  Every spoonfull would form little Flash symbols.

I have no idea why I just spent all morning (badly) photoshopping a fake cereal box. There may be something seriously wrong with me.  Anyway, have a great weekend everyone!