For years Disney has been coming out with different do-it-yourself toys. The first big success that I can remember is their Mr. Potato Head. There are huge bins of pieces and kids can fill up a container full of Potato body parts. They get to pick what pieces they want and as long as the lid closes on the box it sells for that price. A number of other items have followed since then, including build your own lightsabers. Now at Disney’s Hollywood Studios there will be an astromech building line called Droid Factory. 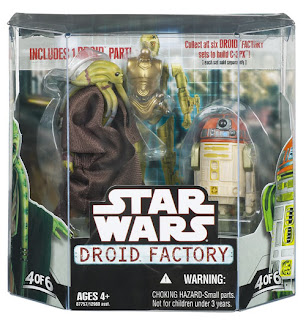 This is not the first time Star Wars has used the Droid Factory name and build-a-droid theme. A while back the Star Wars line got the great idea to do a Droid Factory promotion. What would happen is that when you purchased a figure, it would come with a piece of either an astromech or a more humanoid droid. There were also packs that included a figure, a droid, and a build-a-droid piece. Over 13 waves of figures created 10 astromechs and 10 other droids. 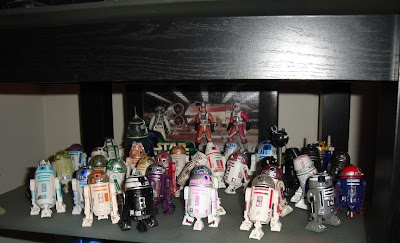 If you were buying large numbers of Star Wars figures it was great for you. I was still collecting Star Wars figures at the time, but only two types. I would buy any Rebel pilot or astromech that came out. The Droid Factory line is when I quit collecting Star Wars. I was okay going to ebay for a rare figure that came packed in with an overpriced starship; I didn’t want to have to hunt down separate legs and domes. I was pretty upset, which seems funny in hindsight. Collecting does strange things to you some time. Regardless, I haven’t bought a single Star Wars figure since then. Even before that rush of Droid Factory figures, I had over 20 different astromech droids. 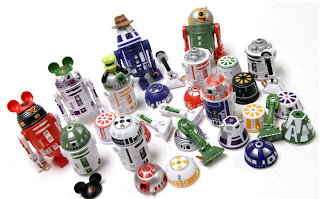 So now Disney and Star Wars are at it again. There are bins full of droid parts. Kids get to choose a dome, a body, 3 legs, and a hat. A single droid costs 11.95 and a 2 pack will run you 18.95. The build a droid is launching during Star Wars Weekends, but will be around after that has ended. At this moment there are 71 different pieces, with new ones coming in August. It has already been announced an Indiana Jones fedora is going to be part of the April expansion. 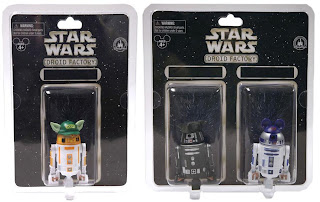 Had I still been collecting this would probably have driven me into a frenzy. That need to have one of everything can be pretty crazy. Even in my Flash collecting I’m trying not to be like that anymore. The next time I go to the Hollywood Studios I’ll probably take one of these little guys home. It looks like there is a color scheme that is near and dear to my heart, but that is a post for another day.
Posted by Ken O at 10:49 AM