Avengers: Did I really just see that?

Last weekend Disney XD ran the newest episode of Avenger’s Earth’s Mightiest Heroes. After what I thought was a weak opening episode, the show has been getting better and better with every episode. Then just when I wasn’t expecting it, the episode Widow’s Sting comes out and blows me away. Sure Hawkeye is my favorite Avenger and this is a very Hawkeye centric episode but there is more to it. That and a lot of the elements were more risqué then I was expecting out of the show. 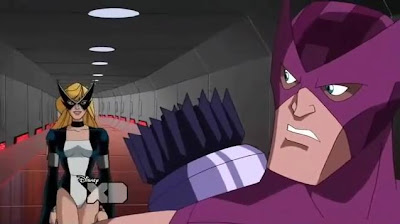 The episode opens up with Hawkeye is still on the trial of the Black Widow. After busting up a AIM/Hyrda meeting he gets called onto the Shield helicarrier and dressed down by Nick Fury. You can tell when you really start liking this cartoon, you accept the weird Amalgam Nick Fury. Anyway, don’t mess with Shield business, yadda yadda. Clint does what he does best, gives everyone the proverbial finger and storms off on his own. Only to be stopped by Captain America and Black Panther, they want to help. Then Mockingbird shows up! Clint lets her join up almost immediately and Panther gets the best line of the show joking that they now know Hawkeye’s weakness. 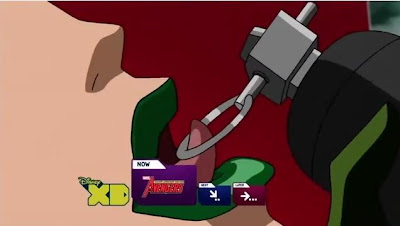 Clint and Bobbi let themselves get captured so they can find the Hydra hideout. They bicker in their cells. Natasha tries to explain what is happening but Hawkeye won’t listen to her. They break out and a huge fight starts. Then it happens. Viper pulls the pin of a grenade with her tongue. Her tongue. Seriously. I rewound immediately and made sure I wasn’t hallucinating. Wow. Readers I have failed you, I couldn’t find a picture of this scene without the Disney XD crap scrawled across it. 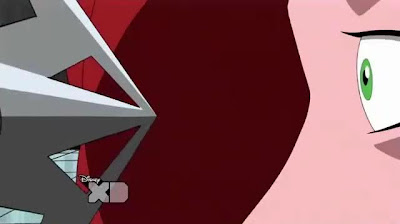 I’ve calmed down now, I can keep going. Whew. Cap and Panther join the fight. There is an incredible scene where Mockingbird is about to be killed by Viper and Hawkeye has to make the choice to save her or take down Black Widow. The Arrow goes sailing towards the view and then the camera spins so we follow the arrow head as it passes in front of Widow’s face, through her hair, and nails Viper’s gun. Very, vey cool. 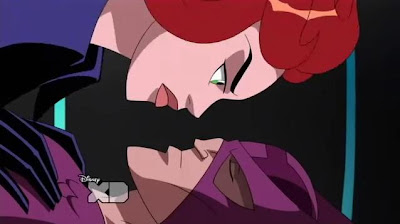 Hawkeye, Widow, and Baron Strucker all end up in a hallway closed off from the rest of the combat. Another seriously well done combat sequence has Hawkeye knocked to the floor where Widow then leaps/straddles him. It is animated to the point where her hair falls across his face. Nicely done and hot…you know…for a cartoon. Strucker is going to kill Hawkeye and Natasha takes him out from behind and then carries the Baron away. The episode wraps with Mockingbird back at Shield, Hawkeye questioning Mockingbird’s motives, and a huge setup that I won’t spoil here.
Posted by Ken O at 8:23 AM