We’re going to be talking about Star Wars Force Unleashed 2, specifically about the DLC that was released on December 14. So if you are fan of the series and want to avoid spoilers about the Endor pack, you probably don’t want to hit the link to the rest of the article. If you’ve already played it or don’t really care about spoilers hit the link below and we can talk about one of the more surreal things I’ve seen in a long time.

Spoilers after the jump


With all the spoiler warnings out of the way we can talk freely. The Endor mission is an out of continuity “what if” story that places Starkiller on the forest moon of Endor. As in the first picture I posted, you get to kill Ewoks which will make plenty of people happy. Not a selling point for me, as I’ve said before, I like the little guys. 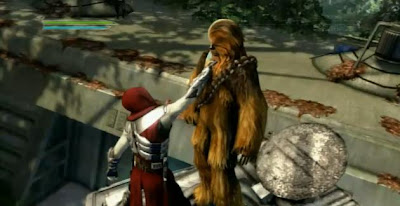 So what is so strange about the DLC? You take out Han and Chewie like they were chumps. Sure there is an AT-ST fight before hand and then you get a little timed button pressing like you were playing God of War. Do it all correctly and you swing on top of the walker. A second later you pull Chewbacca up by his throat, block Han’s blaster bolts with Chewie’s back, and then drop to Wookie to the ground so that the walker falls on him. Han is then Force lifted into the air and impaled on your lightsaber.

I saw the screenshots and then found the whole sequence on youtube. The entire thing just felt wrong. The ease with which Chewbacca is dispatched is ridiculous and Han isn’t much better. I can deal with those characters getting killed; I think it was the way it happened. It isn’t like I have a shrine to Han that I pray to every night. I laughed my ass off at Robot Chicken and that has Boba Fett dispatching heroes left and right. 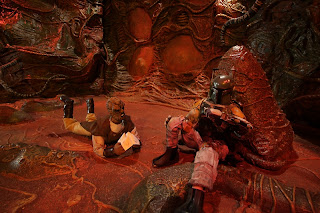 Part of it might be my growing hatred of Jedi in Star Wars. I don’t blame the original trilogy for these feelings; I don’t even blame the prequels. The Expanded Universe novels (with few notable exceptions) pushed Jedis so heavily that a character had to be at least Force sensitive to be remotely competent. They drove any character that wasn’t a Jedi right into the ground. Some people should be kick ass just because they are that skilled. The new cartoon has improved this at least, making pretty cool characters out of both clones and bounty hunters. 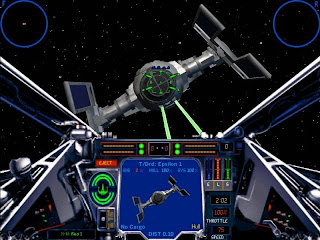 Whew, sorry, had to cut that off before it became a full on nerd-rage rant. Anyway, if you own Force Unleashed 2 the Endor pack is only a dollar. From what I’ve read the main game is pretty short, so this will hopefully give your some more time to swing your lightsaber, I’ll be over here waiting for a new X-Wing game.
Posted by Ken O at 9:51 AM