Merry Flash Friday everyone! I was thinking about holiday specials and realized just how right the DC animation teams got it. The part of the Holiday Knights episode with Batman and Commissioner Gordon in the dinner may be my favorite moment with the two characters ever. Then there is the JLU episode Comfort and Joy. If you are unfamiliar with the episode it branches into three parts after the beginning. One about GL and Hawkgirl, one about Superman and Martian Manhunter, and the third is all about the Flash. Guess which part I’m going to talk about! 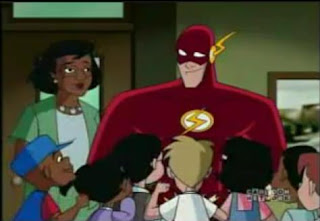 That jolly man in a red suit, the Flash shows up to an orphanage every year to bring the kids what ever the cool toy is that year. This year it is DJ Rubber Ducky; a dancing, rapping, and farting duck. After he promises to get the toy he finds out it is sold out everywhere. To the point where he actually has to visits the toy factory that makes the toy and they give him the last one. 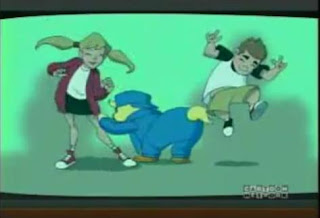 As he is running back to the orphanage he runs into the Ultra-Humanite who is attacking a modern art exhibit because he doesn’t consider it art. During the fight the Humanite lands on DJ Rubber Ducky and smashes it. The Ultra-Humanite says the kids would have better off with a book. The fight pretty much stops as they talk about Christmas and passing good will to others. The Flash tells the Ultra-Humanite to shoot him, that he couldn't feel any worse. Instead of getting shot he is hit on the back of his head and knocked out. 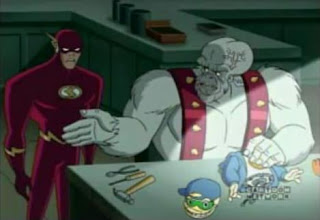 When Flash wakes up he finds the Humanite fixing the toy. He even says he is going to improve the toy Flash worries that it is going to explode or something. The Humanite replies with disdain, “Flash, it is Christmas.” Santa Flash and Ricky the Snowman deliver the improved DJ Rubber Ducky. So what does the improved Ducky do? He reads the story of the Nutcracker. The kids love it. As Flash says, “I kinda liked it when it made the poopy noise, but this is good too.” 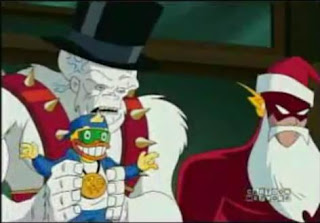 Since he is a villain and he did wreak an art museum the Ultra-Humanite does end up going to jail. But the Flash is there in the cell waiting for him. He set up a small aluminum Christmas tree in the cell. As the Flash leaves the Humanite clicks on the colored light wheel and watches his tree; you can see Flash peaking through the bars and smiling. 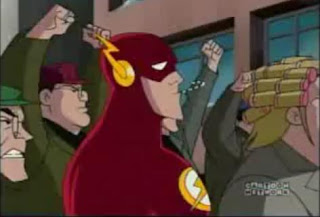 And that is the Flash’s holiday adventure. Very fun and very sweet. In all honesty the Martian Manhunter portion of the episode is probably the best of them. It captures Clark at his best and Manhunter’s exploration of a Smallville Christmas is wonderful even before there is a cookie joke. The end scene with J’onn petting Streaky is just pure holiday awesome.
Posted by Ken O at 8:00 AM