Lots of stuff to talk about for this Flash Friday. I got a new toy delivered Tuesday, so there will be plenty of pictures to help you decide if you need a new toy too. Before I break into toy review mode though, I also stumbled across a shirt that I want to bring to your attention. It isn’t available yet, it was on the coming soon portion of the website I found it on. 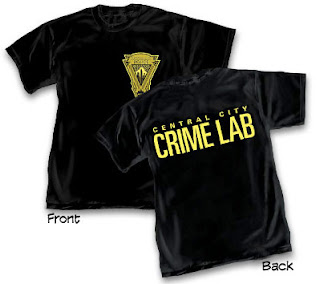 Central City Crime Lab! After talking about what kind of shirts I wouldn’t buy I find this. So dorky really, but I love it. This is a day one purchase for me. With all the crime shows on lately people will most likely think it is from a new Law and Order or CSI spinoff. Now I’ll have something to wear when Brandon busts out his Ferris Aircraft test pilot shirt.

Check out the review Pop! Hero after the jump 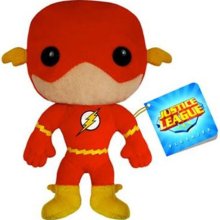 Earlier this year Funko put out a series of tiny plush superheroes. They had big heads and giant eyes. Lifeless eyes. Black eyes. Like a doll's eyes. No wait, that was Jaws. But their big black eyes were really the only facial features the little guys. They were cute, very cute. Somehow I held off buying one because I knew the Batman version was being made into little vinyl figures. I was hoping the Flash would get the same treatment. 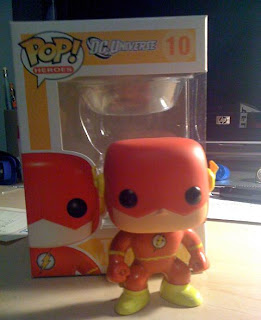 It was a gamble and it paid off. Tuesday morning I got my delivery, the Funko Pop! Hero Flash. So was he worth the wait? He is smaller then the plush. The vinyl one standing at 3¼ inches and the plush was 7 inches. He also has a little nose bump that the plush doesn’t. The skin tone is also a little more realistic. 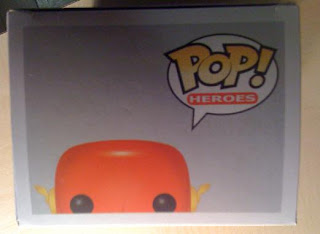 If you are one of those mint in box type collectors and pictures of my Flash running wild is shocking now that the packaging is very bright and colorful. The figure can easily be removed from its box and then returned without any damage. 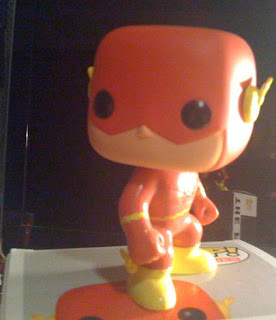 Do you like the pose he is in? If not, you don’t have a lot of options. With a whopping one point of articulation the little guy can turn his head and that is it. In all honesty though a large draw of the figure is how simple it looks, if there were lots of joins and swivel lines it would hurt the figure. 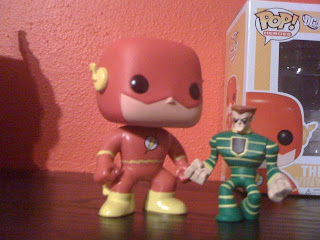 I paid 8 dollars for mine. So while they are small for vinyl figures they are affordable. There are chase versions of the figures too, adding metallic paint. The price increases accordingly. I was fine with the normal version; I’m not a big fan of the metallic gold replacing the bright yellow on my Flash stuff anyway. 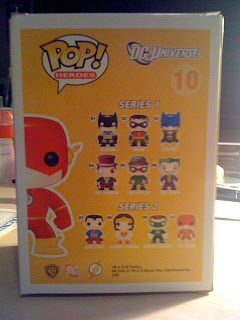 If you aren’t a Flash fan and somehow made it all the way through this review know that Series one of the Pop! Heroes was all Bat Family. Series 2 also includes Superman, Wonder Woman, and Green Lantern. I’m very happy with mine. Hopefully they sell well; I’d like a villain or two for my Flash to fight.
Posted by Ken O at 8:35 AM