My toy collection grew again, just in time for Flash Friday. While braving the holiday shopping crowds I found the Justice League Unlimited Barry Allen figure on the shelves. Now I’ve skipped a lot of this line, I don’t have a Weather Wizard or Mirror Master. So the thought did go through my head, do I really need another Barry figure? Turns out that answer was yes, yes I do. 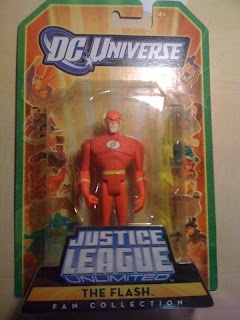 I have two or three Wallys from the line and the maquette with the same sculpt, but I didn’t have a Barry. When the show first started there were debates as to who it was under the cowl, Batman outs everyone in Starcrossed (it was one of the better Bat moments in the series). This figure replaces the white eyes with visible blue yes, the V-belt with the straight across belt, and dark red for a lighter shade. 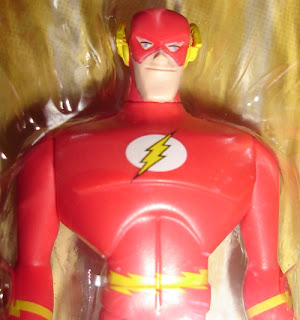 And it was the correct symbol. The Animated Justice League Flash had a simplified lighting symbol. I liked it, but the geek in me always knew it was wrong. Now that Wally has adopted the use of that symbol in the comic I can rest easier at night. But adding the correct symbol went a long way in me deciding to pick up the figure. That and they gave Barry blue eyes. It is such a minor detail, but one that will make Flash fans happy. 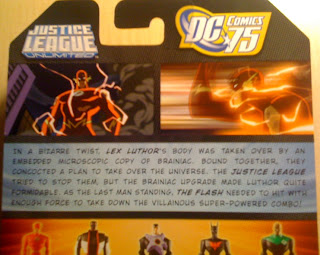 The funniest thing about the figure though is the card back doesn’t make any adjustments for this being a different Flash. It reads, “In a bizarre twist, Lex Luthor’s body was taken over by an embedded microscopic copy of Brainiac. Bound together, they concocted a plan to take over the universe. The Justice League tried to stop them, but the Brainiac upgrade made Luthor quite formidable. As the last man standing, The Flash needed to hit with enough force to take down the villainous super-powered combo!” 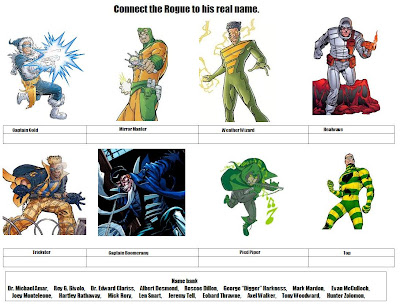 In non-toy news I had been joking about making a quiz for my wife to see just how much comic knowledge she had picked up after living with me. She did decent with some DC Geography, could pick out Iron Fist’s on again/off again love interest Misty Knight from a line up, and she nailed a line up of cat themed characters when I asked if they were DC or Marvel. Then I asked for the real names of the Rogues. Not so good. I included the picture above so you can see what I had given her. The only one she got right was Len Snart. After the test she asked me why the Golden Glider wasn’t on the list. How awesome is that?  Yeah, she’s a keeper.
Posted by Ken O at 10:18 AM