On the first post of the year we had our big reveal of Punch, which I’ve been holding back for a couple of weeks now. In that post I mentioned he was designed by Caanan Grall, well Caanan has a website named Occasional Comics Disorder where he runs the web comic Max Overacts. I’ll go ahead and say it; Max Overacts is my favorite web comic out there right now.  It is something you need to read.

So what is this wonderful web comic about? The star is Max, of course, a creative and overly dramatic kid, hence the title. His best friend is Curio, a ventriloquist dummy. His best human friend is Klaus. Then you have his family; Mom, Dad, and older sister Andi. The other important character is Janet, the child television star that Max is obsessed with. Obviously there are other characters, teachers, neighbors, etc… but those are the ones you need to know about from the start. 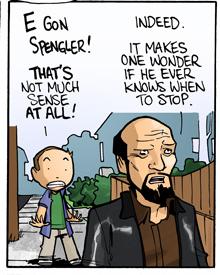 The strip is incredible because one day you’ll get Max ranting about social upheaval, the upcoming apocalypse or something along those lines and then the next strip can totally change directions and be a heart warming bit of tenderness between Max and his Mom. His family teases and antagonizes each other in a way that feels totally realistic. Mom and Dad are just used for the setup of the next joke, they seem like real people.  More then that, they seem like people you'd like to know. 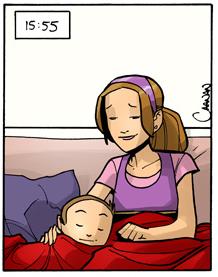 The fact that Caanan is a fantastic artist doesn’t hurt anything either. A lot of my appreciation for his art comes from the facial expressions he uses. Sometimes detailed, sometimes minimalistic, you know exactly what the character is thinking or feeling. While often hilarious, many of the strips would work even without the dialouge.  Not that the dialouge is bad.  Who else can turn E Gon Spangler into an exclamation?  He also has a knack for drawing attractive, realistic (ie non-Power Girl-like) women. That sounded a little creepier then I meant it so...moving on. 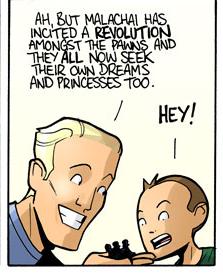 You can also check out Caanan’s art on Comic Book Resources weekly feature, The Line is Drawn. Pick up some of his original art at his Etsy store. Or order the collection of the strip Celadore that he did for Zuda comics. 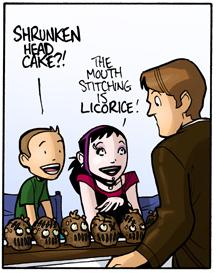 So head on over to Occasional Comics Disorder, enjoy the Max, and leave some comments over there. The strips deserve praise and I comment over there so much already that Caanan probably thinks I’m stalking him.  Tell him That F'ing Monkey sent you...or leave that part out, you know, the whole stalking thing.
Posted by Ken O at 10:20 AM