Last week the new issue of the Flash came out, where the issue before it retold Captain Boomerang’s origin, this one retells the origin of Eobard Thrawne, Professor Zoom. We are going to take a look at that origin today, so it is more of a Reverse Flash Friday. Getting started, Professor Zoom first shows up in issue 139. Oh, did you think we’d be going over the new issue? I actually haven’t gotten to my local shop yet to pick it up yet. 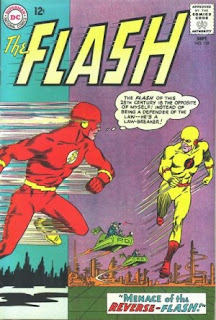 As I was saying, Flash issue 139 opens with Dr. Drake’s creation, a “Time Satellite.” It is pretty much a time capsule without all that waiting. Close the door, push a button, and it is instantly on its way to the 25th Century. While the Time Satellite is filled with things from the present, the two important items are an atomic clock and one of the Flash’s suits. Dr. Drake is upset because after he sends the Time Satellite through time, he is worried that the atomic clock will become an atomic bomb! Ha ha, take that future!

The Time Satellite appears and instead of being afraid of something just appearing out of thin air, the future people decide to loot the time capsule. A man named Eobard Thrawne steals the Flash costume and concludes that using 25th century science he can manipulate the suit into providing the same super speed that the Flash had. As long as the suit is, “close to my body.” Creepy. That sounds so stalkerish. Do you think he smelled the suit? Sniffed the crotch? I bet he did. 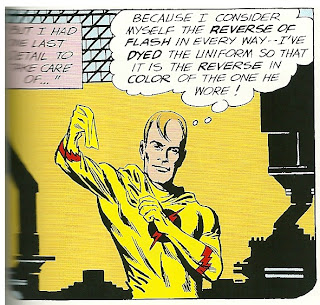 Because of Thrawne’s scientific leanings both crooks and cops had called him “The Professor,” so he decides to call himself Professor Zoom. Now super powered, the not so good Professor decides to begin stealing Cribi sculptures. Because we don’t live in the 25th century we don’t know what those are, but the editors throw us a bone and explain, “It is necessary to interject here that in the year 2418 explorers from Earth landed on the strange world of Cribi. The earthmen found almost nothing whatever on the lone planet except certain striking metal sculptures. It was subsequently discovered that the metal of the sculptures would not tarnish, that it could not be dented or even analyzed! The sculptures were taken back to Earth where the mystery about them grew as their fame spread!”

The Flash shows up in the future thanks to Cosmic Treadmill and sees the contents of the Time Satellite on display. Of course we know his costume is missing, but so is the atomic clock. Flash also sees a newspaper with Professor Zoom on the cover. Flash and Zoom soon meet but the Professor is able to escape because he added “twin portable electro-rockets” to his suit to give him a boost of acceleration. Flash tracks him down by following his speed vibrations and they fight again. Finally Barry realizes that since Thrawne’s speed is manufactured so is his protection from the air friction. In a fairly brutal tactic Barry runs fast enough to burn off Zoom’s protective coating until he gives up.

We aren’t done yet though, there is still an atomic bomb about to explode! Flash finds it in the home of an elderly woman where she is just staring at it like it’s a television. Which to me is the best part of the issue, this old lady stole the atomic clock. Flash races in, grabs the clock, and leaves all so fast that to her it looks like the clock just disappears. Flash drops the bomb off in the Arctic Circle and lets it explode there, sorry polar bears. Then he returns home thinking he’ll never have to face the Reverse Flash again. Of course he does, it only takes till issue 147 before he shows up again. 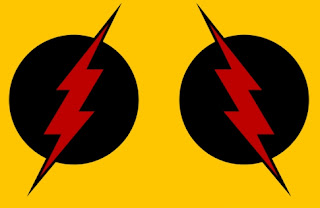 Reverse Flash extra #1. When Thrawne appears his lightning bolt faces the same way as Barry’s. That makes sense considering it is the same suit just dyed a different color. When Hunter Zolomon became Zoom his lighting bolt faced the opposite direction. But ever since Thrawne showed back up in Rebirth he has been wearing the reversed lighting symbol also. Has anyone seen any reasoning behind this one? 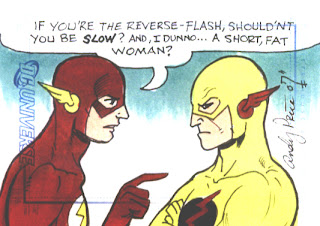 Reverse Flash extra #2. Andy Price, asking the really important question.  I don't own this card, I found it online.  I really wished it was mine though.  So very awesome.
And with that, Reverse Flash Friday comes to an end. I should have a couple little things to talk about next week if my order arrives in time. See you then.
Posted by Ken O at 10:32 AM