Did Blackest Night leave you swimming in fake plastic rings? DC isn’t finished yet. It was just announced that in June Flashpoint #2 will ship with a Flashpoint edition ring. The release of Flashpoint will also have a set of pins to go with all the mini-series. So those cool little icons for each series can now be used to accentually stab yourself in the chest. Toy Fair is this weekend so we may be seeing a lot of Flash related toys being released.  In fact the first set of Flashpoint figures has already been revealed. 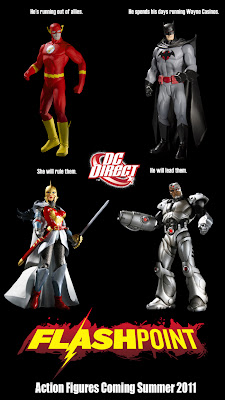 It starts with a nice looking Barry figure, I’m not sure how different it is from the Barrys that DC Direct has already released. If it is an upgrade I may have to purchase it. The other figures are the Flashpoint versions of Batman, Wonder Woman, and Cyborg; easily skipable for me. It is awesome to see a Flash line of figures, but what about all the members of the Flash Family that still don’t have figures of their own this isn’t the line up I was hoping for. So what am I hoping for? Glad you asked. 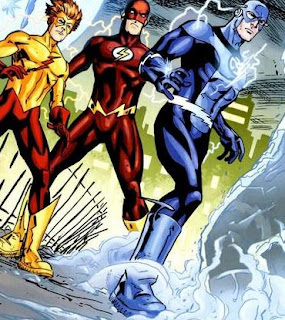 We need an updated Wally West figure. The straight across Walter cowl and the Justice League Animated symbol work better then I ever thought they would. We haven’t seen a lot of this costume, but it has really grown on me. I know there is a ton of old style Wally stuff out there, but his new look is more then a year old now. It is time for an updated figure. 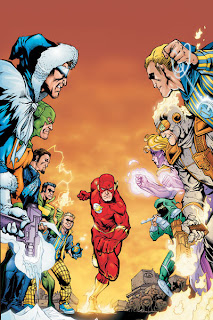 The Rogues. If we are just talking the DC Direct line, the Rogues need some serious love. If you’re a long time collector you probably have the DC Direct Captain Cold and Mirror Master. Maybe the Grodd or Boomerang Jr. That’s it though. We need a Weather Wizard and a Heatwave. Give us a Piper in his hooded look. Newly revived Captain Boomerang? Yes please. Axel Trickster with a clear base to make it look like he was walking across the air would be fantastic. We don’t have to stop at the current Rogues either, I’m sure I wouldn’t be the only one buying a Golden Glider figure.

Flash Rebirth gave a new costume to more then just Wally. His daughter took up the mantle Impulse and got a new costume in the process. Now I’m not 100% sold on the new look, to be honest I really liked the yellow and white costume she wore when she was rapidly aging. But then she’d be more of the Kid Flash and I’m not going to get into any Impulse/Kid Flash debates here; those get way too heated. I like Irey and I’d love to have a figure of her to put next to her dad.

Iris and Linda. There hasn’t been many figures of non-powered characters, but I’m pretty sure Jimmy Olsen, Lois Lane, and even Alfred have had DC Direct figures. I want Iris and Linda. I’ve joked for years that I was going to buy the 13 inch Batgirl, pose her next to the Barry, and tell everyone it is Iris at the costume party. These women play an important part of the Flash’s adventures and I’d love to have them represented in my collection.

I could go on and on asking for more figures. Eventually I’d just start getting more and more obscure. Trust me; it took all of my willpower not to bring up wanting a Walter West figure. I guess I just did bring it up, oh well; there will be no green rings in my future. I wanted to end with this thought. DC Direct has been doing build a scene statues. Could this be the Flash’s year? I’ll start saving my pennies just in case.
Posted by Ken O at 11:00 AM