We are back to our in depth review of the cartoon Bigfoot and the Muscle Machines starring the best named hero ever, Yank Justice. If he didn’t read the first part, I highly recommend starting here. Before we start I just want to talk about the stellar voice lineup here. Slye and Adrian Ravenscroft were voiced by Chris Latta. You can’t ask for a better bad guys. Red, Redder, and Jennifer were all played by Susan Blu. Arthur Ravenscroft was Peter Cullen. That trio alone makes Transformers fans happy. Yank Justice was played by veteran actor Lance LeGault. The guy has been in a million things, but was most recognizable to me as Col Decker from the original A-Team.  Total bad ass. 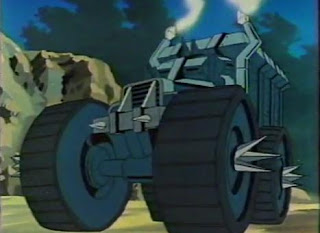 We left off with Yank and his friends attacked by swamp ninjas.  They used fire arrows to chase the heroes into the path of Barbarian a giant monster truck driven by Ravenscroft's chauffeur.  Bigfoot tries to fight the larger truck but can't stop from being pushed into a spiked pit by Barbarian. How will Yank, Jennifer, and Bigfoot survive? Read on. 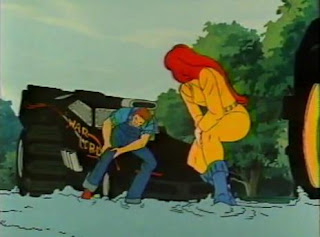 Barbarian’s driver climbs down the pit to steal the map but Yank starts fighting him. During the fight Jennifer climbs into Barbarian, wedges the gas pedal down with a crowbar, and sends it driving off into the distance. Its driver chases off after it, leaving our heroes time to tow Bigfoot out of the pit. Close invites Red to come ride with him since they have to drive slowly until Bigfoot can be repaired.  When they stop, the trucks are caught in quick drying cement and the team is ambushed by steamrollers. The team breaks free just in time with Close carrying Red to safety. Even with one of the trucks pulling Bigfoot they all quickly outrun the steam rollers. 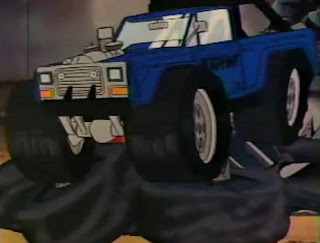 Finally Bigfoot is taken to a garage where they can make repairs; making Bigfoot even bigger and badder. Jennifer reveals that the map is Ponce Deleon’s map to the Fountain of Youth. Barbarian shows back up and a large automobile magnet places the Orange Blossom Special in a car crusher. The new and improve Bigfoot races to the rescue. Black Gold pulls down the tower controlling the crusher before Professor D. is hurt.  Bigfoot and Goliath fight by ramming each other head on before Yank drives Bigfoot off a mountain of crushed cars and lands on top of Barbarian, destroying it. Jennifer and the map are pulled into Ravenscroft's limo only to be chased by War Lord. Close loses the limo after if uses a smoke screen and an oil slick. 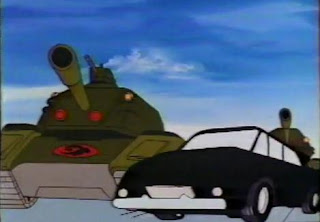 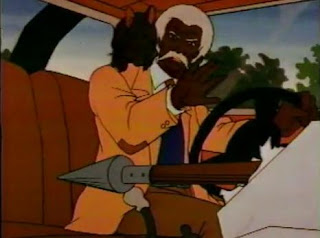 Finally near the fountain they spot the Ravenscroft's limo. War Lord rolls over a pressure plate and is crushed by a giant statue. Black Gold does the same only to be flattened by falling columns. Orange Blossom Special sets off a trip wire which causes a statue to fold in half and reveal a giant crossbow. The crossbow shoots through the front of the truck and into the cab, almost skewering the Professor and Dilly. The ancient defenses have stopped all of our heroes except for Bigfoot! 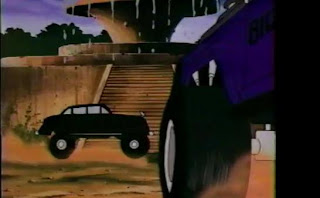 Ravenscroft gets to the fountain and becomes young again. The now young Ravenscroft ditches his chauffeur to do battle with Yank himself. The limo slams into Bigfoot but Yank quickly recovers. Bigfoot smashes the fountain so Ravenscroft won’t be able to continue to use its powers. Ravenscroft tries to destroy Bigfott but is run into the side of the fountain.  The heroes prematurely celebrate their victory. Vowing it isn’t over yet, Ravenscroft begins charging the heroes only to run over another trapped area. A cannon raises up out of the ground and shoots the limo causing it to crash! Ravenscroft runs off into the swamp and begins rapidly aging. Alligators are seen beginning to take interest in him. 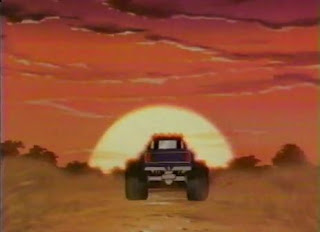 While Jennifer laments the loss of the fountain, the other team mates complain that their careers are over. Except for Bigfoot all the vehicles are totaled and they don’t have the money to fix them. Just then Close falls through the ground and into a cave filled with gold and treasure. Yank begins walking off, because being rich wouldn’t suit him to well. Jennifer climbs into Bigfoot and the two drive off into the sunset. 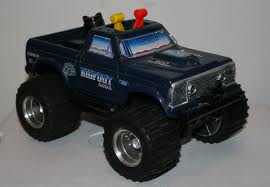 That my friends is the story of Yank Justice. Somehow Bigfoot and the Muscle Machines wasn’t picked up for a regular show after that. Maybe it was the licensing? All of the hero’s vehicles were real, even if the characters weren’t. There were toys of Bigfoot, War Lord, Black Gold, and the Orange Blossom Special but again they were just of the vehicles. There were no action figures to go with them. A fact that pains me to this day.  While Bigfoot is still around it isn’t the pop culture sensation it was in the 80s, so I doubt we’ll ever get to see Yank Justice again. It's a shame to let a name that awesome die.
Posted by Ken O at 11:00 AM