Tuesday, Dwayne McDuffie passed away from complications during a surgical procedure. I don’t have an amazing personal story about Dwayne, I was never lucky enough to meet him. I do have a love and respect for what he brought to the comic industry. I wanted to put something up on the site that would share how incredible his work is with readers who may not have been familiar with him. Once I picked what I wanted to talk about, I knew it had to wait until Flash Friday. Dwayne was a producer and writer for the Justice League cartoon. He is credited as the story writer and producer for the episode we’re going to talk about today, The Great Brain Robbery. 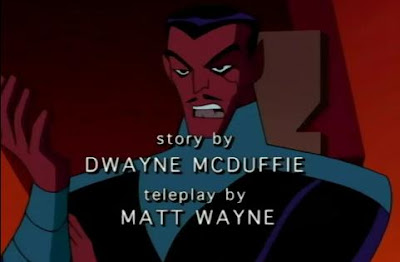 Strap in, this will be a bit of a long one. 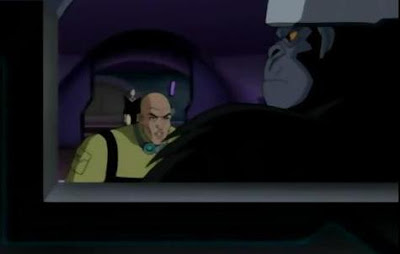 The episode begins with Luthor angry that his attempts to revive Braniac have failed. He blames Grodd, who he currently has locked up. Grodd wants to bargin for his freedom, but Lex is unwilling to deal with the ape, and storms off. Lex decides finding a way to take the information from Grodd’s mind would be easier. There is a nice moment where Tala, voiced by the beautiful Juliet Landau, brushes Grodd off for Lex. It is pretty clear she only wants to be around the leader; regardless of whom that is. Since we’re talking voice casting, Lex is Clancy Brown and Grodd is Powers Boothe. Seriously, three characters into the episode and the cast is amazing. Justice League managed to pull in some of the coolest people to do voices for them. 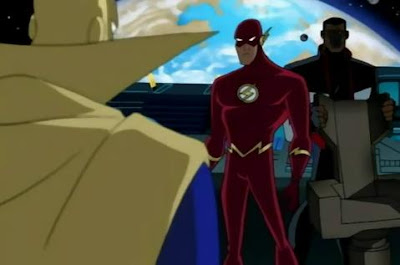 The rest of the villains are worried about Lex’s growing obsession with Brainiac. Their last leader tried to turn everyone on Earth into monkeys, so they have good reason to be worried. Lex tells them he is going to make all of them richer then they’ve ever been. Cut to the Watchtower and John is complaining that the team needs to proactively find Lex’s bad guy group instead of just reacting to them. Mister Terrific and Dr. Fate want to use the left over psychic residue from when Grodd took over Wally’s mind way back in the first season to find out where the super villains are hiding. Wally is not confident about having people going into his mind but is strong armed into helping. 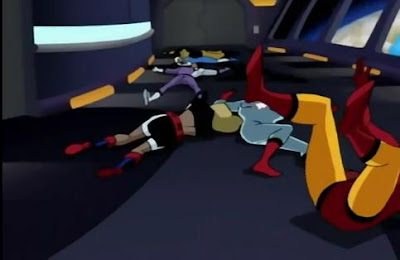 Meanwhile Lex is hooking Grodd into a machine that will pull the information from Grodd’s mind and put it directly into Lex’s. Dr. Fate is following the link to Grodd just as this is happening, so everyone gets electrocuted for a moment and then we see that Lex is now in the Flash’s body and vice versa. One of the things everyone got a laugh out of when this aired is that Wally’s voice actor, Michael Rosenbaum, was currently playing Lex Luthor on Smallville. So in a weird way he got to play Lex in this episode too. Lex-Flash immediately tries to escape the Watchtower while Flash-Lex gets winded after trying to run 15 feet. The Watchtower goes on full alert, but you put a super intelligent bad guy in the body of the fastest man alive and he is going to do some damage. If nothing else this episode just how powerful the Flash can be when he wants to be. 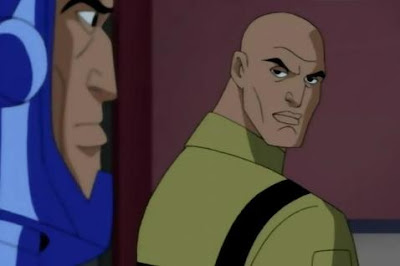 Green Lantern searches for Lex-Flash while Dr. Fate goes off to find out what needs to be done to reverse the mind switch. Worried that the leader she has attached herself to may be in trouble, Tala follows Flash-Lex around trying to make sure he appears to be strong in front of the other villains. They are close to mutiny anyway, so he needs to be careful. To get a moment of peace, Flash-Lex runs into the men’s room. As soon as enters the bathroom he sees the mirror and realizes what happens. Tala, who he calls the “creepy hot chick”, and Dr. Polaris follow him into the bathroom and question him on whether or not they are still doing the “big plan”. As they are leaving the men’s room Polaris asks if Lex is going to wash his hands. Flash-Lex replies, “No, because I’m evil.” 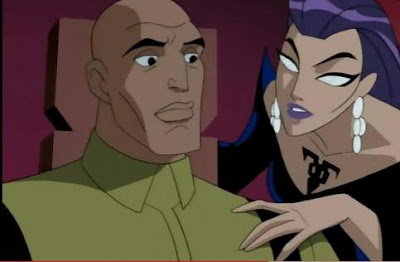 Lex-Flash finds the Javelin bay and quickly steals one of them. Unfortunately for him, Mister Terrific informs him that the bay doors are locked down and the Javelin’s weapon systems can not be used while inside the Watchtower. Lex-Flash tries to ram his way out only to have Green Lantern and Red Tornado show up. Flash-Lex is brought in front of everyone to go over the heist scheme that Lex came up with right before the brain switch. He flounders all over the place, threatening anyone that questions him. Even Bizaro notices that Lex hasn’t been right in the head since the accident. Flash-Lex finally figures out to have the other’s go over their part in the plan so he knows what is going on. He leaves, only to be pulled into a room with Tala. She informs him that he needs to reset before the mission. After the door is closed for a minute or two you hear him object, “Hey, that’s not restful.” 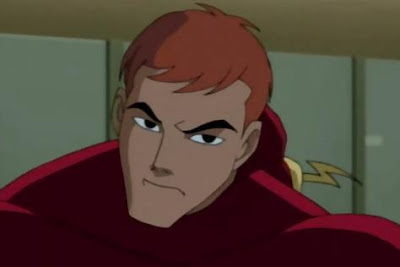 Much like Flash-Lex did earlier, Lex-Flash retreats into a bathroom. He complains about how difficult the day has been when he realizes he is in front of mirror. Saying, “If nothing else I can at least learn the Flash’s secret identity.” He pulls off the mask, looks in the mirror, and says, “I have no idea who this is.” The scene cracks me up every time. Back in the villain hideout Tala is fawning over Flash-Lex for being “different, attentive, caring, and enthusiastic.” Yeah. Flash was knocking boots with the “creepy hot chick” while in Lex’s body and she really liked the change. Right before Flash-Lex leaves on his mission he is told that Grodd has recovered and wants to talk to him. Grodd reveals that he knows that Flash and Lex have traded places. He gloats that he isn’t going to give Flash away; he just wants to watch Flash get torn apart when he is finally discovered. 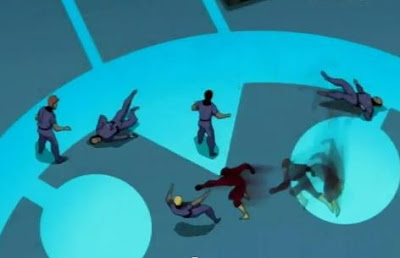 Dr. Fate reveals that he has a spell ready to switch everyone back, but he needs to be in physical contact with either Flash or Lex. Even with Fate, Green Lantern, and Red Tornado Lex-Flash is proving very hard to catch. Flash-Lex keeps trying to call to the Watchtower, but is constantly being pulled into leading the heist. Everything is just about wrapped up with the heist when Flash-Lex gets a high priority message. It’s Lex-Flash telling everyone that a Justice Leaguer is actually impersonating Luthor. Flash-Lex is being questioned when he dashes to the radio and makes a quick call to the Watchtower. Before he can say anything he is knocked out. It is enough for Mr. Terrific to get the coordinates though. Lex-Flash takes over the Watchtower’s control room as Steel, Dr. Light, and Ice beam down to help Flash-Lex. 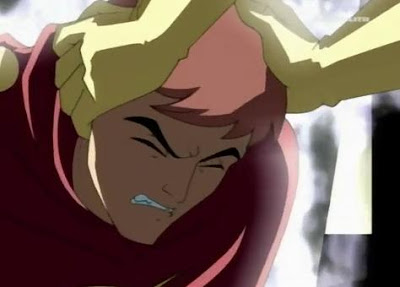 There is a brief fight that ends in Tala, Dr. Polaris, and Sinestro escaping with the knocked Flash-Lex in tow. Planning his escape, Lex-Flash powers up the teleporter. He learns not to match wits with Mr. Terrific and is quickly knocked out as Mr. Terrific uses the gravity controls to slam Lex-Flash face first into the floor. Got to love that after Fate, Tornado, and Green Lantern chased Lex around all episode, Mr. Terrific just out smarts him. Fate performs the spell and reverses the mind switch. Wally has to almost reveal John’s old nickname to prove that it’s really him. The League is let down to find out that Wally learned absolutely nothing about the location of the bad guy hideout. So all of the trouble was for nothing. 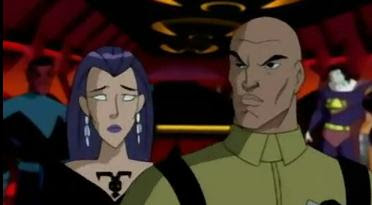 Lex on the other hand is tied up and interrogated. Polaris is planning to take over as leader when Lex dispatches him with just a press of a button hidden on his belt buckle. He quickly puts everyone back into their place, leaving no doubt that he is Lex and not an imposter. The episode ends with Lex giving Tala the brush off and calling her a twit. She seemed so happy with the Flash that I can’t help but feel sorry for her, even if she is evil and manipulative. I guess I have a soft spot for “creepy hot chicks”. 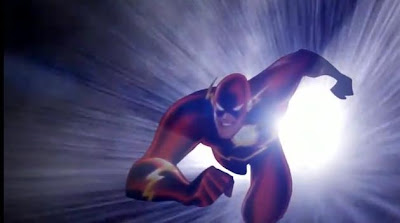 And that’s the Great Brain Robbery, one of my favorite Justice League Unlimited episodes. Sure I’m biased because it is a Flash-centric episode but it is also a great character study of Lex and Wally. On top of all that, it has to be one of the funniest episodes in the entire series. This is just one of the episodes that Dwayne was involved in. Personally I know I’ll be digging into my box sets this week, it just seems fitting. I haven’t had a chance to pick it up yet, but All-Star Superman was just released this week. It was also written by Dwayne McDuffie, check it out when you get a chance and if you already have leave your thoughts on it in the comments.  Come back next week and see the review that was giving me so much trouble.
Posted by Ken O at 7:00 AM