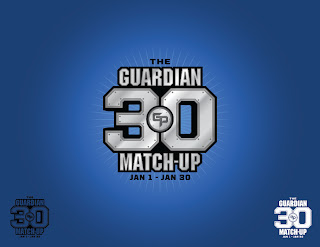 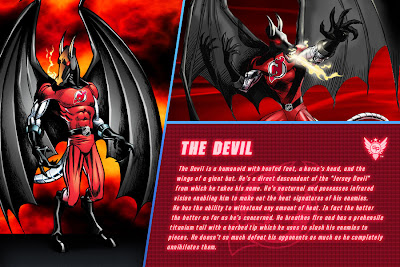 New Jersey: The Devil.
B: Why make him a direct descendant of a mythological creature. What is the story point in that? I just don’t see how that makes him more relevant.
K: At least it’s not a guy with a pencil thin mustache.
B: A little guy with a red suit?
K: Horns and a tail, exactly. On top of that he’s easily the best of the division.

B: That isn’t saying much, but definitely.

K: He calls bad guys mooks in his comic. That’s awesome. He just needs to cut down on the devil puns.

B: It’s a good thing he is resistant to heat with the way the Devils are playing. 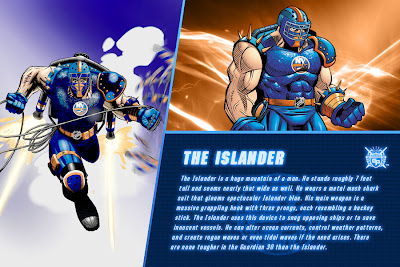 K: Why is the grappling hook multicolored?

B: It’s made of hockey sticks.

K: But each stick isn’t a different color, its striped. It looks like it’s made of Pez.  Of course who needs a grapping hook when you have a jet pack?

B: He takes after Boba Fett. He is also rocking the 90s thigh belt and pouch.

B: The guy is 7 feet tall. He should be in net instead of DiPietro.  He'd probably block more pucks.

K: At least he could take more then one punch.  Especially since he’s wearing a metal mesh shark suit. Did he find a metal shark and skin it or took normal shark skin and applied metal to it? I won’t lie, I love the helmet design. 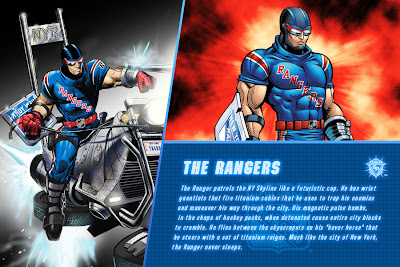 B: On to the Ranger. We have to get the hover horse out of the way first. It’s a motorcycle driven by reigns.

K: I can’t believe I didn’t notice that. Why is there a football goal post on the back of the bike?
Maybe he’ll use it as a catapult. Do we want to talk about his powers?

B: There were two powers I wanted to see out of the Guardian Project and exploding pucks were one of them.

K: That and the in comic he puts the guy to sleep, that isn’t even described on his picture.

B: In the comic he calls the hover horse not just a ride, it’s his friend. Is it sentient?

K: So it’s like 30/30 from Bravestar? Besides the sillies of the hover horse he looks decent.

B: It’s not a bad design, I think the shield is cheesy, but with everything else I can look past that.

K: This is a good place to point out that I love the fact they include a little original 6 logo on the Guardians of those teams.

B: Yeah, that is a nice touch. 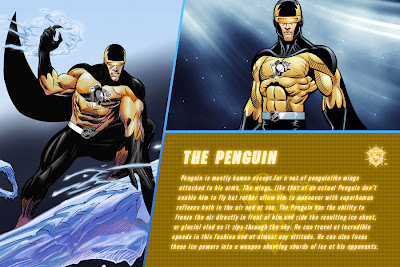 K: At this point in comics with that visor you are either Cyclops or Nexus.

K: Can you blame Stan Lee for ripping himself off? Of course we’ll see more of that again in other divisions.

B: Why does he have superhuman maneuverability? Penguins on the ground aren’t very maneuverable.
And I don’t see those little arm wings helping any.

K: Despite what the bio picture says, in the comic the wings are more like pieces of a cape/scarf thing. I don’t really understand I don’t think the artist did either.

B: And shouldn’t the Canuck be his archenemy? Killer whales eat penguins.

K: I think more then the whales he should look out for the Flyer, because I don’t anyone that hates penguins more then flyers fans 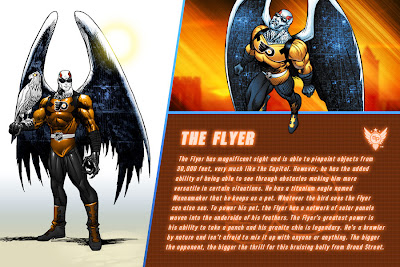 B: Speaking of the Flyer, what the fuck is with the neck feathers? What purpose do they server besides making him look like a d-bag.

K: I wish I had an answer. In some of the art his arms are feathered too.

B: Beyond that, it’s obvious that he has giant wings, why do they need to be painted on his head too?

K: I really can’t even describe how the Guardain that should look the toughest in the NHL turned into this. They are the Broadstreet Bullies for fuck’s sake and this is what they did to them?

B: Why is he an albino, are there a lot of albinos in Philly?

K: Not sure about albinos but what about Titanium Eagles?

B: Haha! I had to look that up. The eagle is named after John Wannamaker, the man who built the first department store in Philadelphia and is considered the father of modern advertising

K: So their honoring him by naming a metal bird after him? Next you’re going to tell me is that Tallyhawk was named after Saint.

B: He’s the patron saint of metal birds. He really created Bobo instead of Athena.

I told you that was going to be a rough one. Next week we are going to look at the Northeast Division who has my favorite member of the Guardians. So the tone will be much different.  And you can check them all out for yourself at http://www.guardianproject30.com/. Regardless of how much we might laugh at some of the designs, I still like the idea of this. Hopefully it takes off with the kids because I want these guys to stick around for a bit.  This was also the first joint post, so hopefully they will flow better in the future.
Posted by Ken O at 9:24 AM