The last time I did a Tales from the Brain Jar it turned into a multi-sketch epic by the amazing Dan Brereton. Obviously that isn’t something that is ever going to happen again.  Today’s entry comes from the FX convention in 07. Considering last year’s FX was totally canceled a month before it was supposed to happen I’m pretty sure that is a dead convention. Who knows though, maybe it’ll pop back up in another year or something.

This amazing piece is from the Reverend Dave Johnson, one of the best cover artists out there. The character is Cole "the Wolf" Burns from the crime series 100 Bullets. Besides 100 Bullets, Dave has done some incredible covers for Batman, Punisher, and a lot of others. They seriously look like they should be hanging on a gallery wall and not on the rack at your local shop. You know that iconic Superman Red Son cover where he is standing on the hammer and sickle? Yeah, that’s Dave Johnson. Just look at that Batman cover below.  Incredible stuff.  You're going to be able to see a lot more of his art now, Dave just became one of the newest members over at Comic Twart. 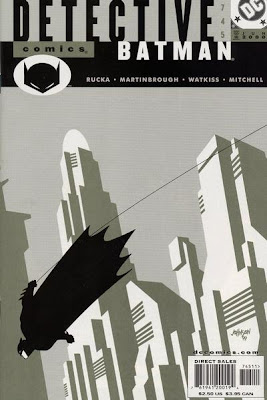 As if that wasn’t cool enough, Dave is also a founding member of Drink and Draw. Encouraging artists to go out, meet each other, sketch, and have a few beers. I know a group of local artists in my area have a sketch group at a book store here, but I’d be way more likely to go if I could have a beer. Of course I’d actually need some form of artistic talent, but except for bitchin stick figures, I suck.  Back to the sketch itself for a moment, besides how awesome the character looks, I love the little nods he threw into it from the story.  Anyone who read 100 Bullets will never hear or see the word Croatoa the same again.  And the owner of those glasses is unmistakable. 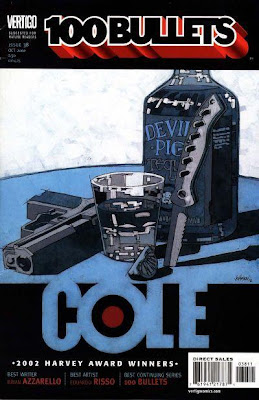 When I was introduced to 100 Bullets the first three arcs were already in trades. A friend of mine I used to work with handed me the first two and told me to give them a shot. I made it through the first one but I wasn’t blown away. I made a comment to him about not knowing if I liked it enough to read the second one. He insisted that I press on and I’m grateful to him for that. The second book floored me. It tied into so many things in the first book that I had to read it again. That’s 100 Bullets, layers upon layers of double crosses and plots. 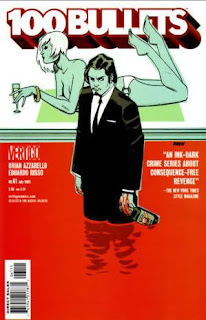 If you go and seek out the book (and you should) I whole heartedly recommend that you don’t start with the first trade; start with the first two. After that you’ll really get a feel for if you are going to like the series or not. The series wrapped up at issue 100 and all the issues are currently available in trade. Working on this installment I realized I’m actually more then halfway through my sketchbook. Luckily Megacon isn’t too far away and I should be able to add one or two new sketches. Hopefully you enjoy the artwork and the brief look on the artists and characters involved.