Brandon and I are back with our look at the Guardian Project. Since we’re looking at the Northeast Division it will be more optimistic then the last one. Remember you can check out the mini-comics that we mention in the article at http://www.guardianproject30.com/. We do question some choices, when each character has eight different powers piled onto his concept it is hard not to. The ideas are cheesey and fun, last night I compared the comics to the old Hostess ads. Realize I meant that in a good way. 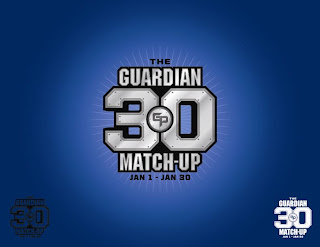 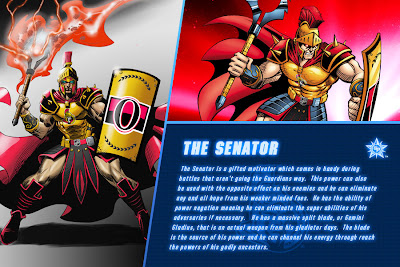 K: Wouldn’t that be a demigod? I wonder who the father was.

B. He has mind control powers. How does that factor into the city or the character?

K: I don’t know but they named his Pegasus after the goddess of the hunt. They don’t mention the Pegasus or the mind control on his home page. They just show up in his comic.

K: In a grouping that isn’t all bad, he’s the bottom.

B: Close to the bottom. He’s bad, really bad but yeah. 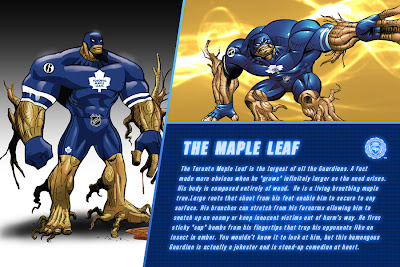 B: Your boy the Maple Leaf

B: He is one of the better thought out concepts compared to the name. Is he a sentient tree? Did he mutate into a tree. Is Toronto populated by tree people?

K: Toronto is the home of the Ents. I like the design. Maybe I’m channeling my 16 year old self and think I’m looking at Maul from the Wild Cats, but I love the way this guy looks.

B: They have the same powers too.

K: Minus the sap.

B: Well yeah, I like the design. I like what they were going for, but his comic was the most annoying. His villain was dazzler crossed with jubilee and talked in color puns

K: Now if we’re judging the quality of the comics…the Flyer had guys dressed like Ben Frankin.

K: Still we’re judging the character not his villains or his first appearance. The Maple Leaf rocks. 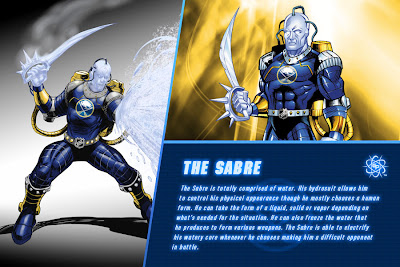 B: Here is my bottom of the barrel

K: It is a confusing design.

B: Not even a little bit. Is this guy sentient water?

B: What are those things sticking in his head?

K: That’s the strangest part of it, I think he’d work without them. I mean he kind of looks like Iceman so a waterman isn’t much of a stretch. He’d just be warmer.

B: What is in the back pack, is there more of him in there? This camelbak is filled with me.

K: I have to point out that this second camelback related joke on this site.

B: Why is water Buffalo’s defining trait anyway? 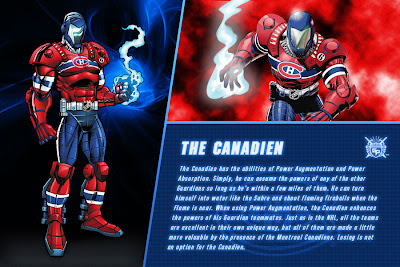 Canadians
K: He had the second power you wanted to see.

B: Yes, rollerblades that pop out of the boots like Wayne Gretzky on Pro Stars. He even has the little rockets.

K: He needs that cause he is the guy with no powers.

B: He takes other peoples powers and makes them better!

K: I’m guessing it has to be consensual or he’d take the bad guys powers and just win.

B: I don’t hate the design. They couldn’t have gone with just a guy in a shirt. So what else are you going to do?

K: I like the look. It isn’t highly original but it isn’t bad at all.

K: Exactly, but like you said, what else could you do? 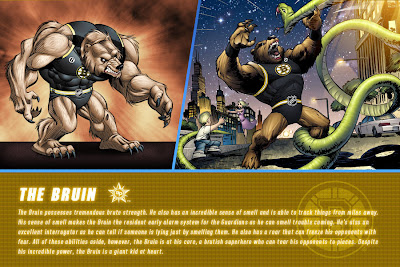 B: Yup. Best thing they could do with what they were given. It’s a giant bear

K: He looks good and it is really limited to what you can do. There is one thing I thought of that could have done. They could have big barbarian guy wearing the bear head skin.

B: Right Right. That’d be cool.

K: Probably would have gotten them in trouble with PETA though.

B: He is just really well put together. Even his powers make sense. Sonic roar. Interrogator. I’d shit my pants in front of a bear. Although I really wish they’d have given him pants.

B: I’m sure it helps with the interrogations.

K: Brandon’s weakness is bear junk and I have a thing for trees, you heard it here first people.

Next week we’ll be checking out what is probably the best put together group of the Guardians, the Southeast Division. They don’t have anyone as awesome as the Maple Leaf, but there is some pretty good stuff in there. Come back and check it out.
Posted by Ken O at 8:40 AM