I ended the last Hangover Thursday saying something about a classy drink that I was going to destroy myself on. Well let me tell you, it wasn’t just classy, it was fucking classy. Last Saturday I was drinking EverBeer. According to the internet there are a few different versions of EverBeer out there. One of them has you mixing root beer with Everclear. Another one I saw said pour a shot into a Bush Light and chug. The latter is pretty close to what I had put together, but chugging is not classy. 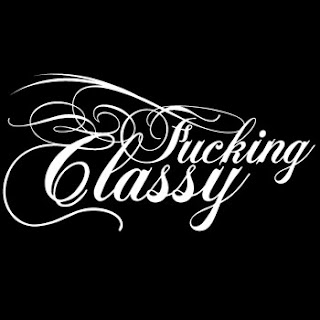 You see, no one came up to me and said, “Hey Ken, you really need to try EverBeer.” About a month ago I was day dreaming or something and realized how nicely the words fit together. Knowing I couldn’t be that original I jumped online and found the two versions I mentioned above. I wanted to drink beer with a shot of Everclear, but I wasn’t sure which beer to use. I figured a cheap beer would be better, because I wasn’t sure how overpowering the grain alcohol would be when I poured it in. My first thought was High Life; it is the champagne of beers after all. 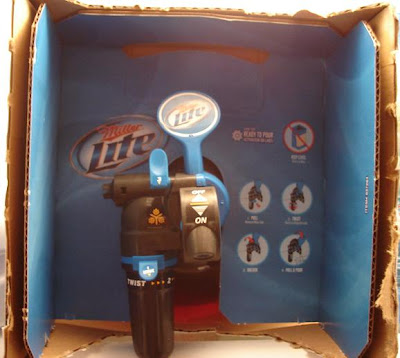 Then I decided to take this experiment high tech and picked up Miller Lite’s Home Draft System. I had seen this in the store before, but never picked one up because I couldn’t imagine when I’d want to drink 5.7 liters of Miller Lite. All it took was the desire to drop more alcohol into it. Anyway, MillerCoors is onto something here. You rip the front of the box off, twist the self contained CO2 system into the on position, and you have draft beer. I’m seriously impressed and would like to see something like this from other beer companies. 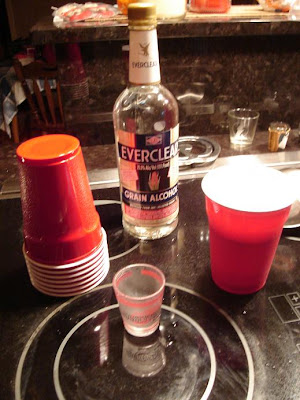 With the Beer part we move onto the Ever part. I live in Florida, so this is the 150 proof Everclear. I can’t control what is legal in my state. As you can see in the picture, I also got the red plastic cups, I feel that is an important ingredient to this drink. So I’d pour a shot worth of EverClear into the cup and then fill it with Miller Lite. With a full shot, there is just a bit of an alcohol aftertaste. Go with a half shot of Everclear and you can’t taste it at all. At either half of full strength the last sip carries a bit of a kick. Considering the grain alcohol is mostly masked by the beer, it is a deceptive drink. It is a fun drink though, and I’m sure I’ll make it again the next time I have a big gathering. If you decided to follow my footsteps, I’ll leave you with the words of wisdom I got form the liquor store clerk who sold me the Everclear, “Be careful with that stuff, you can hurt yourself pretty easily.”
Posted by Ken O at 9:22 AM