Happy Flash Friday!  Tonight lots of comic fans will be returning to the television show Smallville.  What could be causing all this excitement?  It was one image, a group of shadowy figures sitting around a table.  Two of the figures were so iconic though, it was obvious who they were supposed to be; Captain Cold and Black Manta.  Now since this is Flash Friday you can probably guess we aren’t talking about Black Manta, I’ll leave that to the excellent people over at the Aquamanshrine. 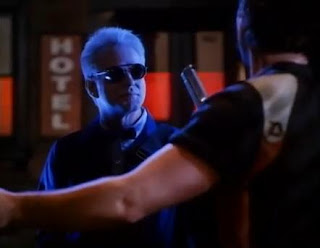 The episode starts with a street view and the radio telling us Central City is in the middle of a heat wave.  The camera pans over to the St. Diogenes Social Club.  Inside the club are four men of dubious gang stereotypes.  Jamaican, Asian, Italian, and Hispanic; it’s like every bad television mob boss in one room.  They are complaining about someone named Swain moving into their territories.  That’s when there is a knock on the door and the man calling himself the repairman from Central City Air. 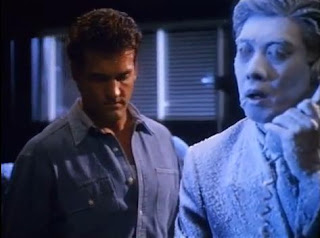 We then switch to Barry Allen getting waken up and told to come down to investigate a “weird one” at the very same social club we were just at.  Barry arrives at the scene to find all four of the mobsters we had just seen frozen solid.  Barry and the other police are baffled by the murder scene, Barry lets us know that you’d have to dip a body into liquid nitrogen to get the same effect, and all the mobsters look like they were frozen on the spot.  Outside the crime scene Barry bumps into a reporter who tries to get the inside scoop but Barry has her removed.  There is a small Lois Lane reference in the conversation, thrown in for all you comic book fans. 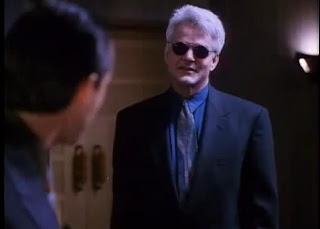 Meanwhile we see our repairman in Mr. Swain’s office.  Swain is incredibly happy with the repairman’s work and offers to make him a full time employee.  The repairman turns the offer down, says that he likes the travel his work gives him.  Swain offers one more job though; one that he says would be the challenge of the life time.  I’m just going to call our albino repairman Captain Cold from now on, it’s easier that way.  Anyway, you probably guessed that Swain wants Cold to take out the Flash. 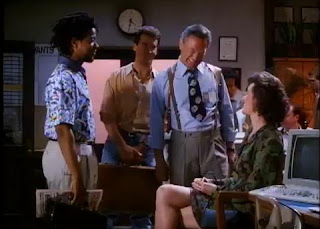 Back at the police station Barry and his partner Julio are called over to meet Terri Kronenberg, a reporter from the Daily Clarion.  She is doing a series of articles about the police and Barry ordered to give her a tour of the crime lab.  Barry drops the job on Julio, using taking the frozen tissue samples over to Star Labs as an excuse to get away.  Officer Murphy, the shows comedy relief tries to get the reporters attention, she blows him off saying he should write his adventures down and she’ll read them.  Good old Murphy jumps right on the idea.  I’m sure hilarity is going to ensue. 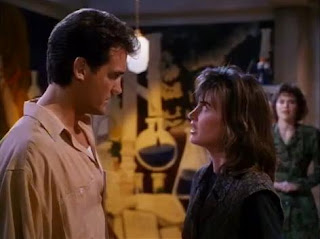 At Star Labs Tina promises to run all the tests she can on the tissue samples.  Barry thinks it is safe back at his lab, thinking Terri would have left by then.  Instead she shows up in his office with takeout; Chinese, Italian, and Mexican.  The reporter is a speed talker and constantly throws herself at Barry who tries to keep her at arms length.  Terri drops her theory that the Flash is someone on the police force and that she is trying to find out who she is so she can get an interview with him.  Tina breaks up the Flash talk with the news that there was nuclear energy in the frozen flesh, leading them to believe it was some kind of weapon.  Terri overhears the entire thing. 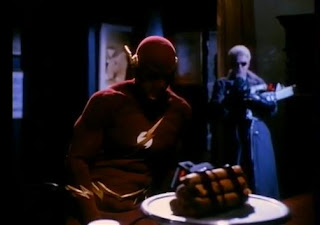 There is a huge commotion outside; one of the passing officers tells Barry that someone called in that bombs were going to go off in three different locations in Central City.  Obviously, this is a job for the Flash.  The first two bombs are deactivated at super speed with no problems what so ever.  It’s when he gets to the third bomb that Flash has a run in with Captain Cold.  Cold uses his freeze to try to take out the Flash.  Flash manages to dodge the first couple attacks but is hit in the foot.  Police sirens are heard in the background and Cold flees calling this matchup a draw.  The cold puns in this episode are deadly. 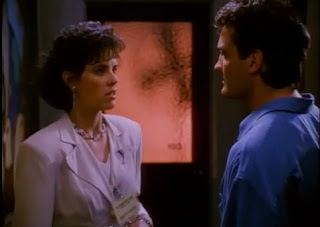 Tina finds that a company in California had created a portable freezing unit only to have it stolen six months ago.  She points out to Barry that the bombs were obviously a trap set for him.  She wants him to lay low, but Barry refuses.  She built tracking device into the Flash’s ear piece so she can keep track of his vitals and where he is.  Barry’s informant Fosnight (Mr. Futterman from Gremlins) calls him at the lab to let him know the guy they are looking for is called Captain Cold.  Cold is an albino mercenary turned hitman.  Fosnight tells Barry that Swain is the one trying to take the town over by using Cold to freeze all of the competition.  That’s when Barry finds the Inquisitor has run an article using the info that Terri had overheard.  Barry lays into Terri, realizing she just wants to do a story on the Flash and that she didn’t really work for the Clarion. 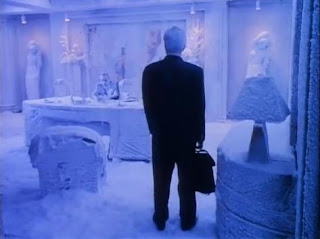 Swain is angered at the Inquisitor article.  Cold assures him the Flash won’t get away again; he’s built something to track anything in Central City that goes faster then 200mph.  Swain doesn’t care and fires Cold.  Cold asks for the other half of his money, but Swain refuses since the Flash is still alive.  As Cold leaves he gives Swain a snowglobe as a present.  As soon as Cold leaves the room the snowglobe explodes freezes the entire room.  Cold then helps himself to the money in the safe.  Showing he’s honorable, he only takes the money he was originally promised. 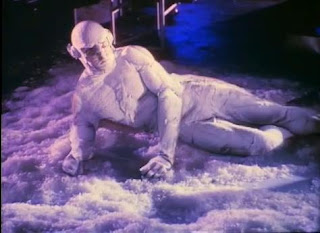 Barry is told of another frozen body that has been found, the Flash quickly arrives to find Terri frozen.  As he gets close she jumps to life and handcuffs herself to him.  It was a trick just so she could interview him.  Captain Cold has used his tracking device though and attacks them.  Flash tries to protect the both of them, but slips on an icy patch and knocks himself out.  Terry quickly unlocks the cuffs and runs.  The Flash comes to just in time to be frozen by Cold’s gun.  Cold tries to grab Terri but she uses the flash on her camera to escape. 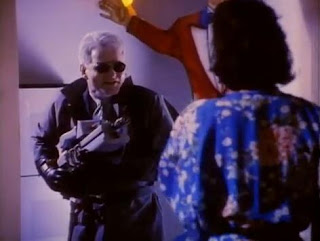 Terri calls the Clarion saying she has pictures of the Flash’s death.  Tina on the other hand is alerted to Barry’s situation and finds the Flash being loaded into an ambulance.  She jumps into the driver’s seat and speeds him to Star Labs.  Well I say speeds, but it was the slowest driving I’ve ever seen.  Tina is trying to save Barry while Captain Cold is tracking down Terri’s address.  It looks like things are all over for Barry when he finally comes to.  Tina theorizes that Barry’s metabolism is so fast it stopped the freezing from killing him.  Barry tells her he could see everything and he has to stop Cold from killing Terri.  Cold arrives to Terri’s apartment first, armed with his freeze gun and even more puns. 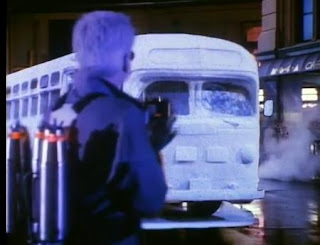 Cold chases Terri around her apartment, making pun after pun until the Flash shows up.  Flash takes Cold out with one punch.  Even though he saved her life, Terri is upset that her photos are ruined.  Flash lays into her hard.  Murphy is still hard at work at his adventures when he is ordered to lock up Cold.  When he comes back, everyone at the station is laughing at Murphy’s story.  Cold uses part of his glasses to freeze the lock in his cell and is armed with a few marble sized freeze bombs to escape the police station.  Tina gives Barry a belt that will protect Barry from one shot of Cold’s gun.  She also tells him that a reflective surface can deflect the gun’s blasts.  Cold arms himself with a spare cold gun.  Still after the Flash he freezes a bus full of people to call the Flash out. 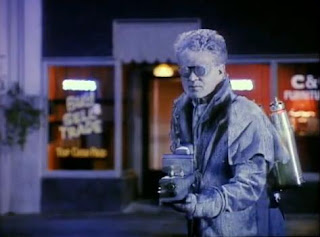 Terri shows up at Barry’s apartment to apologize.  Julio shows up and interrupts the conversation with news of Cold freezing the bus.  Since the Flash hasn’t shown up yet, the police wanted Barry and Julio over there to try and help.  Terri wants to go with Barry but he ditches her.  Cold is taking out cops right and left when the Flash finally shows up.  Flash is hit in the feet and falls to the ground.  Just as Cold is going to finish him off, Flash uses the heat belt and then grabs a mirrored tray and reflects the ice beam back at Cold.  Flash then circles the bus over and over at super speed to thaw out its passengers.  No one saw the Flash take out Cold and everyone thinks that Murphy is the one that did it.  Murphy admits that the Flash was responsible.  Terri surprises Barry once more at his lab to tell him that she quit the Inquisitor and is now writing greeting cards until the Clarion will hire her.  The episode ends with Terri thinking that Julio is the Flash.
And that’s it, the Captain Cold episode of the Flash.  The freeze effects were pretty well done but I have to tell you that this episode has more bad puns then an episode of the Muppet Show.  Anyway I like the other ice weapons he had; I wouldn’t mind seeing the freeze bombs make a comic appearance.  Remember to check out Smallville tonight, although something makes me think they’ll save the real Legion of Doom reveal for the shows finale next week.
Posted by Ken O at 12:52 PM