Tales from the Brain Jar has returned, with a brand new bottled brain to thrill and delight! Well, it is new to the website anyway. Today’s sketch comes from the 2007 Megacon and is by Amanda Conner. You’re all probably pretty familiar with Amanda’s amazing work, but I think I got something pretty different out of my sketch.

Here in all his glory is Dr. Mid-Nite studying a brain in a jar. I know many of you are shaking your head at me. Where is the Pro? Power Girl? Terra? Supergirl? Amanda is known for drawing stunning women and here I bought a picture of a guy in sunglasses. In my defense I really like Dr. Mid-Nite and I really like what Amanda did in the sketch. The Megacon this was done at wasn’t long after the JSA Classified arc Power Trip, which began with the good doctor running some tests on Power Girl. After reading that I knew I wanted a Dr. Mid-Nite running tests on a brain jar; all the humor in this one was totally Amanda’s idea.

So I realize I’ve probably lost some of you. The current Dr Mid-Nite (Pieter Cross) is the third character to use the name and is actually a medical doctor. Due to an accident he can only see in pitch darkness using forms of infrared and ultrasonic vision. He outfitted his goggles with all sorts of scanners and carries blackout bombs; which he can see through but blind everyone else. This is not an ultra-powerful character, but it is a really cool one. One of my favorite things about him is that he’s become one of the go-to guys in the DC Universe when superheroes need medical help or advice. Oh yeah, and he trains owls. 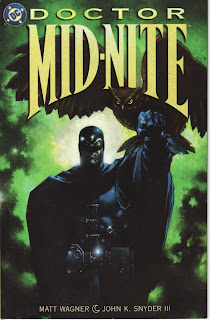 Most of his appearances have been in group settings; or like I mentioned above, as the doctor in the background. Two of the JSA Classified arcs have been about him. One was vampire related and the other about superhero organ snatching. Pieter’s debut story though was a three issue mini-series by Matt Wagner and John K. Snyder III. The entire story has been collected into trade and it is a fantastic read. It felt more like a Vertigo title; the story has the Cross running a street clinic and trying to take down a new, dangerous drug. It was very cool and had a very different feel from the normal superhero fare.
Posted by Ken O at 8:47 AM