I don’t think I’ve talked about how much I love the newest version of Scooby Doo. Mystery Incorporated is a show that gets how to handle a cherished property right. The gang is back to high school age and the monsters are all people in rubber masks. There is a lot more too it then that though. The biggest change up is there is an overall subplot mystery that the group is working on besides whatever else happens in each individual episode. Then there is the new art direction, I’m constantly impressed by the character designs and the backgrounds. 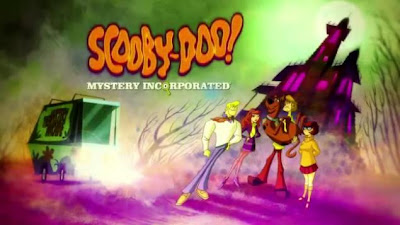 The writing seems like it is written for a slightly older audience then the last couple Scooby Doo projects. Again, when was the last time there was a series spanning subplot in a Scooby Doo cartoon? Not to mention the deeper character relationships. The series is crammed full with homages to the earlier shows. Classic Scooby villains showing up as displays in a Crystal Cove attraction is just the start. A careful eye is always picking out something. It is obvious that the writers have a deep love for the different versions of Scooby in all his previous versions. Hell they even had a Hex Girls episode, so even the newer stuff gets a Mystery Inc spin. 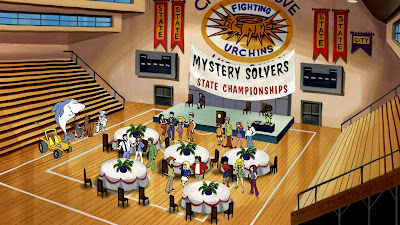 The first episode of Mystery Inc’s second season played last night and it is one of the coolest things I’ve seen in a long time. The team goes to the Mystery Solvers State Championships where they meet up with the cast of the Funky Phantom, Jabber Jaw, Captain Caveman, and Speed Buggy! I had gone into the episode without any spoilers and was so happy I was yelling at the television. And it just isn’t the sidekicks, the entire teams are there. I won’t spoil anything, but obviously the human characters take a backseat to the sidekicks, so there isn’t much Teen Angel action. 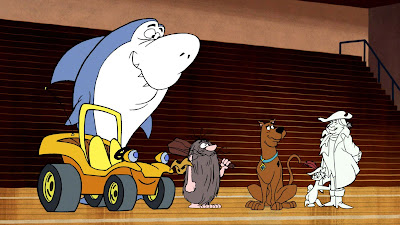 The story gives each sidekick something to do, so they all get a little spotlight action. By the way, I freakin love Speed Buggy. I really want a revamped Speed Buggy cartoon from the same team. Captain Caveman was great in it too, I kept expecting him to have a power failure but he never had one. The episode just aired last night, so I’m sure if you check your local listing it will be repeating many, many times. If you’re a fan of the old school Hanna Barbera shows you owe it to yourself to check it out.
Posted by Ken O at 8:20 AM