Gamera is Friend to All Us Children

There are a few absolutes in my life. Things that my being is so 100% set to believing that I am unshakable in that belief. If you ask me who my favorite giant robot is, without a doubt the answer will be King of the Braves, Gao Gai Gar. No surprise to any reader here, my favorite superhero will always be the Flash. Ask me my favorite giant monster and the only answer acceptable would be Gamera, Guardian of the Universe. There is a special place in my heart for that crazy flying turtle. 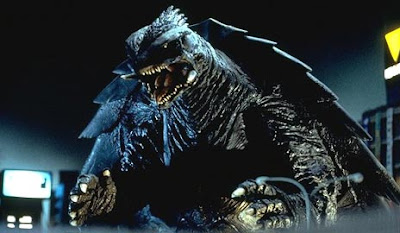 There are three different eras of Gamera films the Showa, Heisei, and Millennium. Showa are the original films; created so Daiei could compete against Toho’s Godzilla franchise. In those early films he was a pre-historic turtle whose fire abilities come from his food. The Heisei films were created in the mid to late 90s. They have Gamera being created in Atlantis to be a Guardian of the Universe. The Heisei movies are fantastic and I can not recommend them enough. The Millennium era changes things again, this time we have a baby Gamera hatching from an egg. 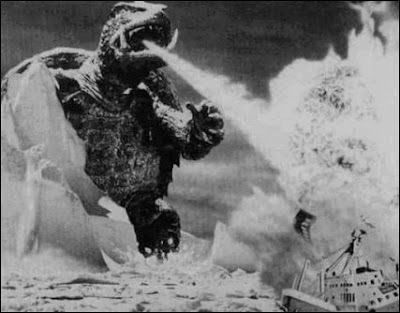 Regardless of which version you’re watching, you get a giant turtle that breathes fire and flies. The flying is the best part, because it isn’t just up, up, and away. No, he pulls his back legs into his shell and jets come out of them. Sometimes he pulls everything into his shell and does a fire spin. Gamera also has extremely powerful healing powers, but he has to enter a coma-like state for them to kick in. So usually a monster beats up on him, he enters his healing state, and then comes back to kick the monster’s butt. Sure it might be a bit formulaic, but it is still a lot of fun. 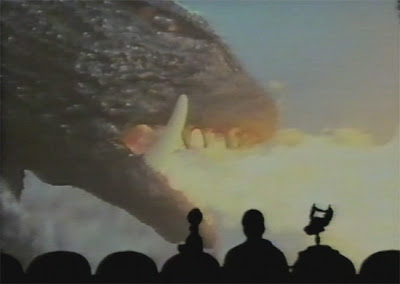 I won’t lie. Even though I had seen tons of Godzilla movies, the first Gamera movie I had ever seen was because of Mystery Science Theater 3000. After that I quickly searched for everything Gamera related that I could. I have both the Showa and Heisei movies on DVD. Now I’ll be able to own the MST3K episodes. On August 2nd Shout Factory is releasing MST3K Vs. Gamera: Mystery Science Theater 3000, Vol. XXI. The set will run just about 50 bucks. 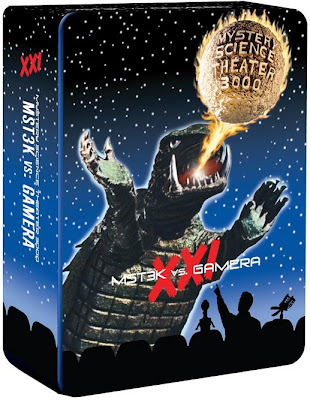 What is in this glorious tin? You get the five Showa era movies that Joel and the bots watched. For the record that is; 302-Gamera, 304-Gamera vs. Barugon, 308-Gamera vs. Gaos, 312-Gamera vs. Guiron, and 316-Gamera vs. Zigra. That in and of itself should be enough to make anyone happy, but wait there is more! You also get these special features: So Happy Together: A Look Back at MST3K and Gamera, Gamera Vs. The Chiodo Brothers, Gamera Obscura: A Brief History by August Ragone (author of Eiji Tsuburaya: Master of Monsters), Original Japanese Trailers, and 5 limited edition mini-posters by artist Steve Vance. Yeah. To put it mildly that is an amazing deal. August can’t get here quick enough.
Posted by Ken O at 9:28 AM