Happy Flash Friday everyone! If you’re looking for a hockey update today, give me one day to deal with my broken heart please. Seriously playoff thoughts and beards will be updated tomorrow. Today I have something pretty awesome to share. In fact I didn’t even know it existed till a friend showed me a box of old magazines that he had just been given. Between the multiple copies of the Robocop 2 adaption were a few real gems. 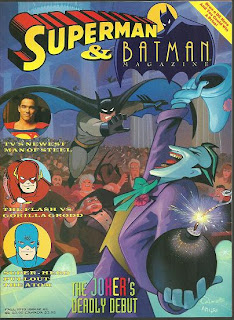 The one I was most excited for and the one we’ll be talking about is the second issue of Superman & Batman magazine. Published in 1993 it contains not only a 6 page Flash comic but also a 2 page bio. We’re going to be covering all of it today.

The comic is titled Monkey Trials and is written by Brian Augustyn. Pencils are done by Mike Parobeck; who was known for working on the Batman Adventures comic and dying very young due to health issues. Rick Burchett was on inks, Tom McCraw did colors, and Tim Harkins was the letterer. The interesting thing about the style on this comic is that does look very animated, but it isn’t the angular DC Animated style. So the Flash look is entirely different then the one we’ll see four years later in the Superman Cartoon. 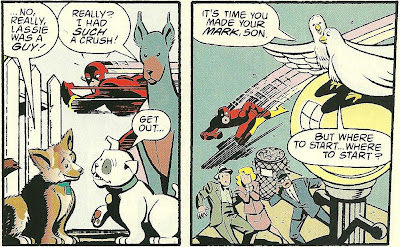 The story begins with in Keystone City where a woman is desperately trying to get into a pet shop. The owner is referred to as Mr. Greeble and looks to be an homage to Mr. Peebles from Magilla Gorilla; considering this is a Grodd story I thought that was pretty awesome. Once the door to the store opens though, all the animals run out and they talk! In fact all the animals in Keystone have suddenly learned to talk. Even though it may look like it from the panel above, this is not a Flash crossover with Dark Horse’s Beasts of Burden. 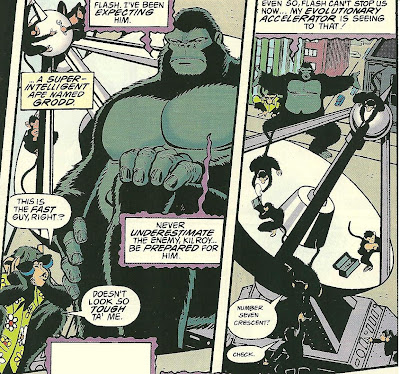 Who could be behind such a strange plot? Well I already gave that one away, it’s totally Grodd. He has built a device that can evolve other animals and is now having his army of monkeys build a transmitter so he can add more animal servants and eventually inprision all humans. I’m guessing that’s how this is working because to have monkey minions build the dish, he’d have to already use the device on them. On a side note I think Grodd’s sidekick here should be in all of his appearances. 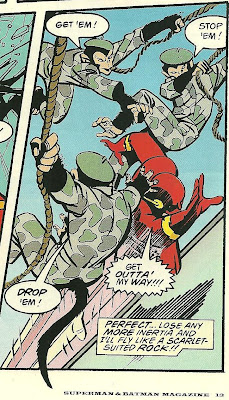 Flash finds where Grodd is hiding out and runs up the building the take him out. First he is attacked by hawks, but he manages to more or less dodge them. Then we get to the highpoint of the whole issue, Gorilla Guerrillas. Yes, I know they are monkeys but if Grodd can call them that I’m going to do the same. Remember, this is all happening as Flash runs up a building. Flash eventually dives into one of the skyscraper’s windows to stop from falling. 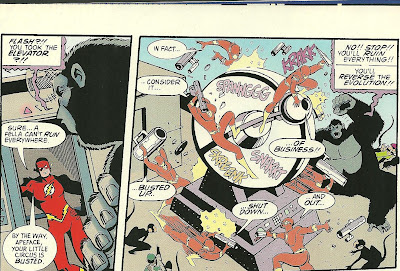 The bad guys are all wondering where Flash disappeared to, when he shows up in the elevator. I have to admit I found the whole scene funny. Flash reverses the evolution ray at super speed. The two panels above really show off Parobeck’s style. And just as Grodd said, all the animals are reverted back to animal intelligence, event Grodd! 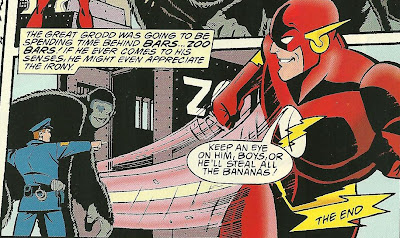 The comic ends with Grodd being carted off to the zoo. Now, he’s ended up in zoos before so that isn’t really a big deal. I’m disappointed he didn’t end up in Mr. Greeble’s pet store though. That is it though, six pages of Flash action. It was a fun read and I’m glad to have happened upon the magazine. But we aren’t finished just yet! 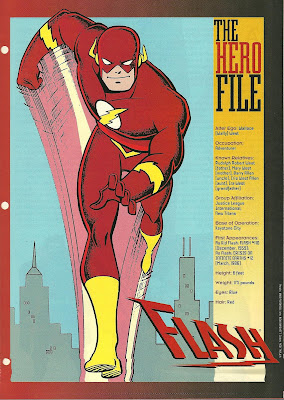 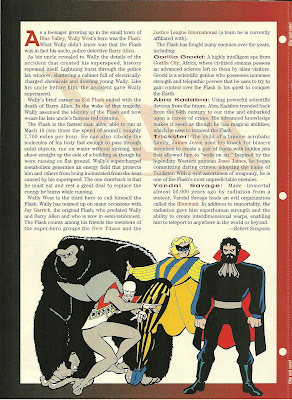 If you click on the pages above you’ll see the images and full size. The bio is pretty in depth. That Abra Kadabra costume is just crazy looking. It is interesting to see Trickster is really they only Rogue showing up here. The magazine is an odd balance between kid stuff and more advanced reader stuff. There is a comic based on the Batman cartoon and then there is an article on the Lois and Clark television show. The last issue of the magazine was Justice League themed; I may have to track that down some day.
Posted by Ken O at 1:01 PM