It’s Hangover Thursday, how’s your head? Personally I have more of an overtime headache then a booze related one, but that is a post for another day. Today is Cinco de Mayo; bars everywhere are heavily stocked with Corona and Dos Equis. The Margaritas are being prepped in both the regular and frozen varieties. Here at that F’ing Monkey we’re celebrating by talking about milkshakes made with Guinness.

T.G.I. Friday’s is currently running this menu promotion called “Better with Brew” where they use booze as a cooking ingredient. I was expecting the normal beer battered items and maybe some beer cheese soup. I was not expecting a milkshake made with Guinness. Beer, chocolate syrup, and vanilla ice cream are not things I normally would have put together, but once I saw it I knew I had to give it a try. 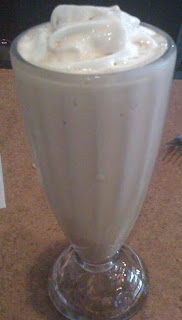 So how was it? Pretty damn fantastic actually. The chocolate syrup is there, but I think it also pulls a lot of the chocolate taste out from the stout itself. The beer is not hidden at all; you know it is there from the very first taste. It isn’t overpowering though and the whole thing is still very sweet. With it already feeling like summer here in Orlando, I think this is a recipe I’m going to be adding to my own kitchen. Although I do think I’m probably going to add some caramel to the mix, I mean how could that be bad? 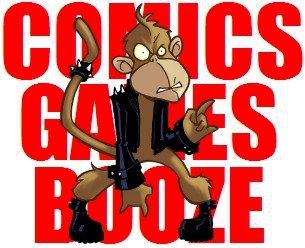 Also I have VERY, VERY IMPORTANT DRINKING NEWS. You may not know it, but May 29th is the one year anniversary of That F’ing Monkey. I’d like to go out and have a celebratory drink and if you’re in the Central Florida area I’d like to have that drink with you. Where is the great meet up? I don’t know, you tell me. Drop your favorite choices in the comment section. I’m up for going most places, but I’d like to find something central for anyone who wants to go.
Posted by Ken O at 7:33 AM