Like every other sci-fi fan I have a handful of spaceships that I consider my favorite. When I was growing up I loved the toy for the Slave 1, but I think a large part of that was it had a handle on it, so flying it around the house at full speed was much easier then even trying to pick up that massive Millennium Falcon toy. Once built in handles were no longer important though, I fell in love with the X-Wing. A few years ago I bought Code 3’s massive diecast X-Wing. 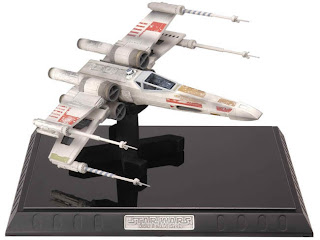 This is just a brief glimpse, because in all honesty I could do an entire article on just how impressive this model is. It was not cheap. But my thinking was sound, I’d buy the best representation of the X-Wing I could find and then I could overlook all the lesser versions. Sure I’d spend money then, but I’d save money and shelf space in the long run. And much like Scrooge, I kept my word. From that day forward I kept Christmas in my heart all year long. No, wait… From that day forward I resisted buying any more X-Wing toys. 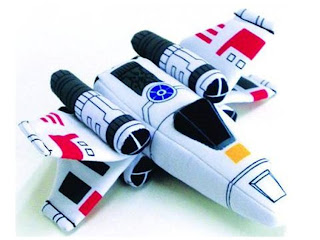 It looks like I’m about to break that deal I made with myself way back in 03. In July they are releasing a plush X-Wing. It may just be too cute to resist. And it’s only like 12 bucks; I could easily field a whole squadron of them. Okay, well I won’t get that extreme. The little plush X-Wing will be coming out with plush versions of the Millennium Falcon and an AT-AT also. We can only hope that a couch sized Star Destroyer in the works. 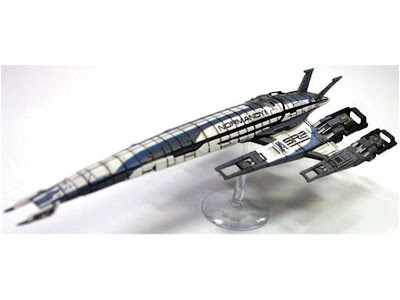 Moving outside of the Star Wars universe, my new favorite ship is seeing its first replica released in October. From the Mass Effect series comes the Normandy. To be even more specific this is the Normandy SR2 that was used in Mass Effect 2. From what I’ve read it will technically be your ship in Mass Effect 3 too, but after a series of upgrades they decide to call it the Normandy SR3 in that game. 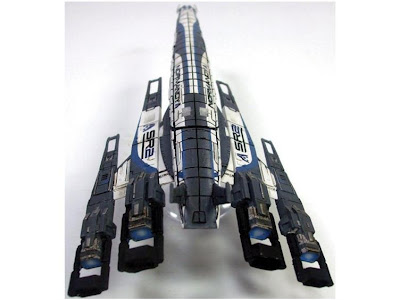 The replica will run around 35 dollars and is 6 ¼” long. I couldn’t find any information on what it is made of. Is it resin? Is it plastic? Is it die-cast? I have no idea. I’m going to guess the flight stand comes with it, but I might be assuming too much there too because that isn’t mentioned in any of the product descriptions I’ve found online. I still pre-ordered it though; because I am weak when it comes to resisting all things Mass Effect. For the record, I’d buy a plush Normandy too although I’d prefer a plush varren.
Posted by Ken O at 7:50 AM