Get ready for the blood splatter, today is going to be Dragon Age centric. We’ll start out with some downloadable content talk and then after the jump there will be a review of one of the new action figures that just hit the stores. Today the downloadable extras got another item to add to the list. Buy a copy of Dead Space 2; get a set of armor for Dragon Age 2 based on Dead Space’s Isaac. It looks like a pretty cool set of armor but I haven’t gotten into Dead Space so that will probably be the first of the extras I miss out on. Some of the add-ons are no longer available and some won’t be available until the Facebook game starts up. 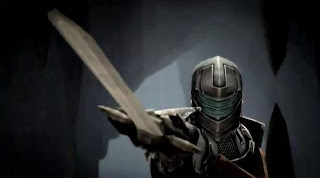 Here is a run down of the items announced so far.

Holy crap that is a lot of stuff! Anyway, we’re only getting started. Follow the jump for the toy review. 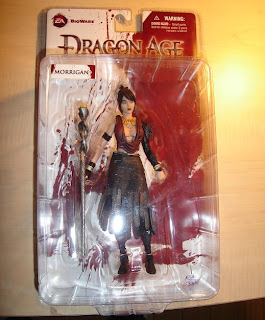 I believe in my earlier writings about Dragon Age I may have alluded to the unhealthy crush I have on the Witch of the Wilds, Morrigan. I realize that she is just a video game character and I probably need help, but instead of going down a saner path, this weekend I dove deeper into my madness. Last week the first wave of Dragon Age action figures from DC Direct came out. Duncan, Loghain, Morrigan, and a Genlock were all sitting on the pegs of my local comic shop when I showed up on Sunday. Try as I might, I couldn’t resist her charms. 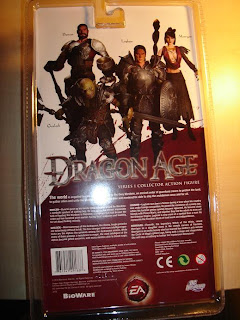 The figure is put out by DC Direct, so unless that one strange collector’s isle in Toys R Us has it, you’ll probably have to go to a comic shop or order online. The packaging isn’t anything special. You get the generic bloody dragon symbol for Dragon Age and all the needed branding. It is the same packaging for each figure in the line; the name is added as a sticker afterward. If you can’t tell from the picture; that is clamshell packaging so get your big scissors out. She was tied down at the waist and ankles. 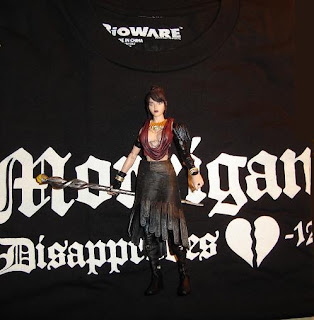 Once freed from all that plastic Morrigan stands at 6.5” and has a surprising 12 points of articulation (neck, waist, knees, ankles, shoulders, elbows, and wrists all have movement). At least on my version, her joints are very stiff and she is very thin. Especially when it came to the ankles and elbows I was worried about forcing movement a little too much and breaking the figure. Overall it is a very nice sculpt of the character and I didn’t seen any issues with the paint application.

Her skirt is a piece of hard plastic that hangs from her waist. It restricts movement a little, but as long as you don’t want to pose her sitting or kneeling you shouldn’t have a problem. She stands okay on her own, but isn’t the most stable figure. For the pervs out there, her top is sculpted to her chest, so you’ll get no show from this figure. She comes with a staff that fits very snuggly in her hand. I had to force it a little bit of the way; again everything feels a bit fragile. The final verdict, she is going to run you just under 20 bucks at most places. She has a good range of movement if you are brave enough to loosen the joints and don’t mind that her legs are restricted by her skirt. I’m happy with the purchase but your approval or disapproval may very. 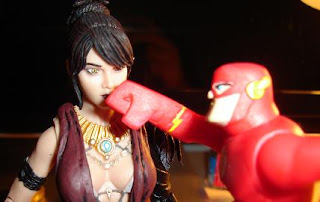 Also, the Flash did not approve of her disapproval. Kapow!
Posted by Ken O at 10:52 AM