In 1967 Filmation created an hour show called the Superman/Aquaman Hour. This hour long show was made up of short cartoons hit CBS on Saturday mornings six years before the Super Friends did. The show consisted of Superman stories in the first half hour, Aquaman in the last half, and a rotating guest star short in between them. Today we look at the first of three Flash’s cartoons that ran on that show, The Chemo-Creature. 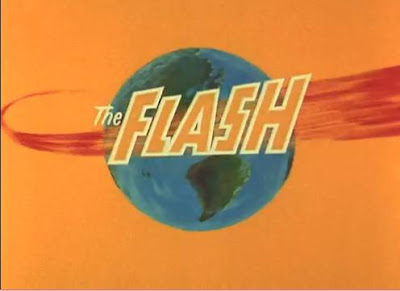 “A scarlet costumer ejects from his ring and in a blur of motion police scientist Barry Allen becomes the Flash, world’s fastest human. The Flash, whose speed allows him to vibrate through solid walls and conquer the barriers of time and space in the pursuit of evil doers. The Flash, scarlet speedster for justice!” That’s the intro that runs at the beginning of the Flash cartoon. If you read about the show in other places you notice the length of the shorts is listed as either 6 or 7 minutes. That’s because the people calling them 6 minute shorts are skipping the introduction.

The short may be only 7 minutes, the article is a little long.  Hit the link to keep reading. 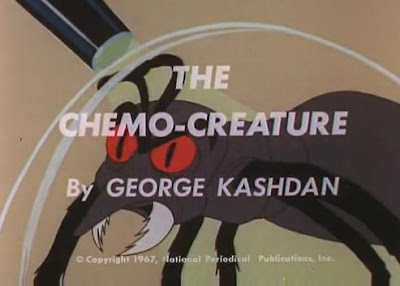 The Chemo-Creature starts with Barry Allen at a nuclear laboratory outside Central City witnessing scientists “stimulating the growth cells of a red ant.” To the surprise of everyone watching, the ant begins to grow. The animation here is a little spotty, so the ant is either as big as a dog, as big as a person, or bigger then a person. It does somehow gain the ability to spit gas from its nose. I’m going to make a guess here as to where this experiment went wrong. When picking ants to do experiments on, you probably don’t want to use the ones with demonic red eyes. Something tells me you’re setting yourself up for failure if you do that. 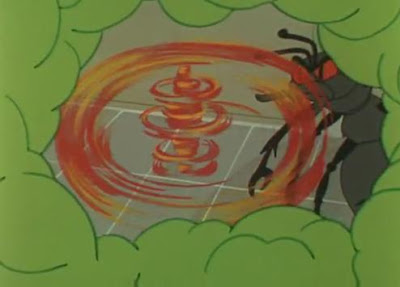 The gas fills the room like a smoke screen and allows Barry to sneak into the next room and change into his Flash costume. I do want to say that I’m impressed that they used the idea of him hiding his costume in his ring, especially since the episodes are so short. The writers probably used it as a filler device since the actual plots of the cartoons were so simple. Anyway, the Flash begins spinning so fast he disperses all the gas and saves the choking scientiests. Actually no he doesn’t. He spins so fast he creates a vacuum around himself and confronts the giant ant while surrounded by the gas. That’s when the ant shoots blinding light out of its eyes, stunning the Flash and letting the Chemo-Creature escape the lab by crashing through a wall. 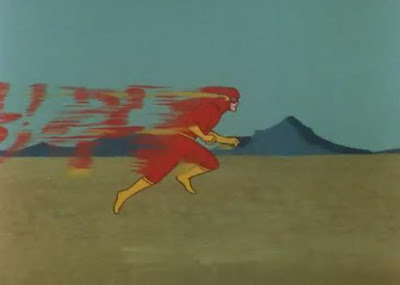 The scientists explain that, “the overdose of radiation gave the creature the power to create chemical effects at will.” The ant escapes to a large tunnel in the side of a mountain, but the Flash quickly finds him. But the ant fires lighting bolts out of its antennae that send the Flash reeling. The creature has escaped again. To find out where the ant ran off to, the Flash holds out his arms and spins around until he begins to float into the air like a “human helicopter.” Seriously the narrator jumps in and says, “Like a human helicopter the Flash rotates his body. Rising faster, faster!” Instead of helicopter Flash I opted for a picture of him running, at least that looks cool. 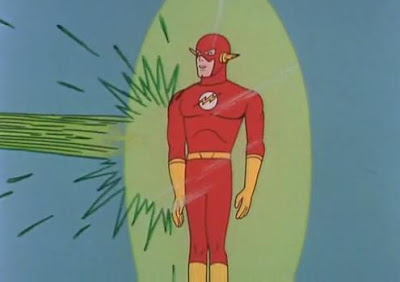 The Flash quickly finds the Chemo-Creature, only to be sprayed by something that is never really explained. What ever it is, the Flash is enveloped in this clear cocoon thing. The ant shoots more lighting from its antennae and it sends the Flash’s cocoon flying until it lands in front of some farmers. The Flash vibrates so fast that the cocoon shatters and the Flash is launched into the air with the same “sproing” sound effect that cartoons use when the character ties springs to their feet. Flash chats with the two farmers (who are both given dumb hick voices) for a moment before running off to find where the creature went next. 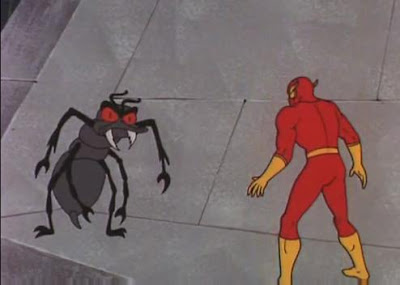 There is an unexpected montage of the Flash running while he is looking for the Chemo-Creature. Flash is shown running vertically up mountains, over lakes, and even jumping over canyons. Finally he spots the giant ant heading for a hydroelectric plant. He warns the plant workers to get to safety before facing down the Chemo-Creature. Flash punches the ant a few times before it starts glowing and shooting energy beams everywhere. Flash has to retreat and regroup. 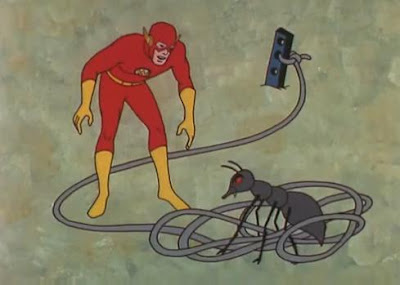 Flash jumps on a giant spool of steel cable and runs backwards on it until it is completely unraveled. Then he grabs the cable and then confuses the ant for a maypole and begins running around it. The ant tries to use its powers again, but the steel wire is anchored into the ground and has literally become a ground wire. As the energy is siphoned from the creature the ant begins to shrink back to normal size. Flash returns the ant to the lab and we get a cheesy joke at the end. It’s worth nothing that when the ant is completely shrunk down this time it actually looks like an ant, instead of that red eyed thing the episode started out with.

So there you have it, The Chemo-Creature. If you haven’t seen these shorts before you can find them on the DC Super Heroes: Filmation Adventures DVD. It doesn’t have the Superman, Superboy, or Aquaman stuff on it, but the guest star shorts are pretty fun. It is obviously on a different level then what we saw on JLU, but if you keep an open mind there is a lot to enjoy.  Next week we’re going to be talking a little bit about Kid Flash, but not in anyway that you’d expect.
Posted by Ken O at 9:06 AM