It’s time again for another Hangover Thursday, how’s your head? As promised this edition is going to be Megacon related but not in the way you’d probably expect. While this is a story about booze, it isn’t anything about wild Megacon after-parties. I’m not quite sure I want to share some of the ridiculously stupid things I’ve done at those parties. Today we’re going to be talking about my newest attempt to get the F’ing Monkey name out there, mini-bottles. 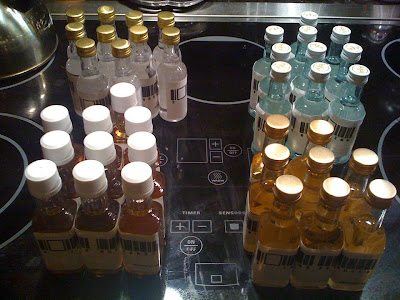 I got the idea months ago. It was one of those nights where I call Brandon out of the blue with no regard to his personal schedule. Usually when I’m struck with an idea like this I don’t bother with pleasantries or anything, so the conversation goes went something like this:

“So, I’m thinking we buy a bunch of mini-bottles of liquor, stick our website url on them, and hand them out to creators at conventions.” 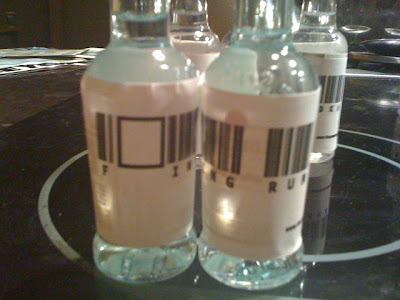 Yeah, that was it. No “hi, how are ya?”; nothing but a face full or random Ken delusions. I’m such an ass sometimes. But beyond that, we both agreed it was a good idea. So I spent about a week researching websites that printed labels, that in and of itself was a lot to take in. Finally I found a site that had the size I wanted and was reasonably priced. So I ordered 80 of them. Actually I ordered 20 of 4 different types. So now I have plenty of stickers for F’ing Rum, F’ing Tequila, F’ing Vodka, and F’ing Whiskey. 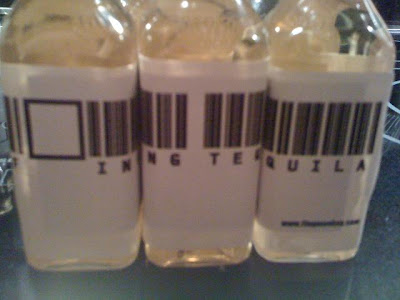 The next stop was to the liquor store. Having not done this before, I knew I wasn’t going to need 80 bottles. Honestly, I while I was pretty sure people would want the bottles, I wasn’t 100%. It was quite possible that it’d come off creepy and I’d get a lot of people turning me down. So how many bottles I bought was going to be a gamble. I decided 40 would be a good number. I was the only person in the liquor store when I walked up to the counter and said, “Yeah, this is going to sound really strange. I need 40 mini-bottles.” 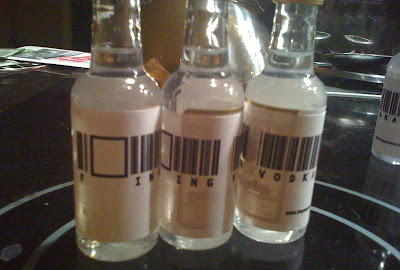 The clerk took it like a champ though. I was only able to get 8 of the Tequila; we wiped out their entire stock on that one. Then we moved on to the rum, whiskey, and vodka. The back shelves where all the little bottles are held had these big gapping holes in them as each choice I made pretty much depleted all of what ever brand I picked. We laughed at what his manager was going to think when he came in the next morning. Just for me, I grabbed 3 mini-bottles of Baileys. I figured fixing up the gas station coffee I was grabbing on my way out to the convention center would make the morning better. CYA Note: I added the Baileys once I got to the convention, note before. 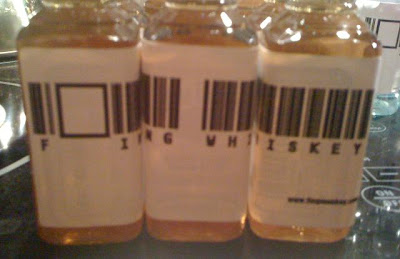 So it is the Thursday night before the convention, I’m in my kitchen, and I’m staring at 38 bottles. I didn’t pick the highest grade alcohol because I was on somewhat of a budget. Even shopping the deals I had dropped about 64 bucks. The doubt set in again. Did I just spend all that money on stickers and booze for nothing? This was either going to go over really well or I’d have to throw a party and have all my friends help me get rid of the bottles. 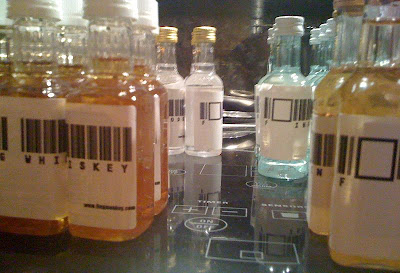 So how did it turn out? Fantastic. I gave the bottles to the writers/artists as I was interviewing them, an incentive to answer my silly questions. Some people happily took them and showed them off to other creators. Obviously I didn’t offer them to the people who don’t drink. Some people politely declined, I was not offended. One person told me they didn’t want alcohol on their breath while interacting with fans and I totally understand that. I ended up handing out somewhere between 10-12 bottles. Which means I’ll have plenty when I start the next round of interviews at Heroes.
Posted by Ken O at 9:30 AM