The Flood returns. Last week I showed you a bunch of the more “adult” things coming out for the Green Lantern movie. This week it’s all about the kids. I’m not showing off that awesome looking clear green blaster, because I think most people have seen that. No, I’m focusing on the things that are going to be on Target’s clearance isle a month after the movie comes out. 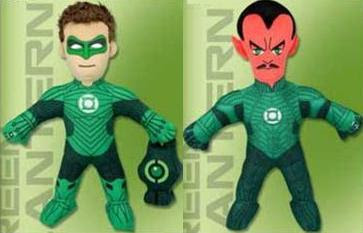 Do you love Green Lantern? I mean really love. Like, do you want to tousle his hair and take him to bed? For just 15 bucks you can! Maybe you can hug the evil out of Sinestro. Here is your chance to try that too. If you hate what the movie is doing to your favorite comic these would also make great Voodoo dolls. I almost photoshopped this so the dolls were holding hands, I might go back and do that later. 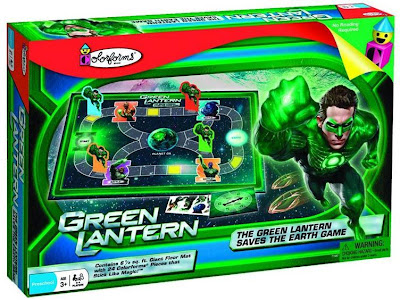 Holy crap they are making Colorforms again! I thought they went the way of the Shrinky Dink. For $20 you get a 6 ½ square foot floor mat and 24 Colorforms. They made it a game somehow, I think this is pretty cool if you have a kid. If you don’t know what Colorforms are they are like reusable stickers that I believe are just help on through friction. They used to have a shiny cardboard background that you stuck the Colorforms to so you could make your own scene. I had the Castel Dracula’s Funhouse which was awesome. 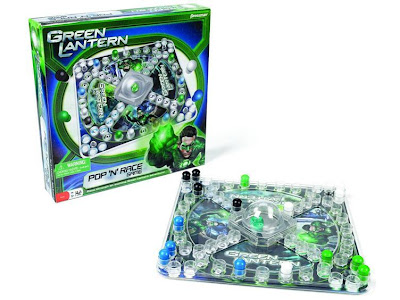 Look out; it’s the Pop-O-Matic bubble! Since this game is made by Pressman and not Hasbro I guess we really shouldn’t call it that; that might get them into Trouble! Haha. See what I did there? Anyway, I’m really disappointed with this game. They missed an amazing opportunity to use the different color rings here and instead went with generic pieces. Green, Yellow, White, and Black with their respective symbols pressed into the top of the pieces would have made this game kinda cool instead of just being a rip-off of another company’s game. 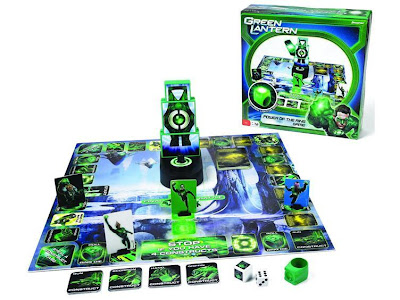 Green Lantern Power of the Ring. This thing looks crazy and in a good way. I used to love board games that had rules like nothing else. I had a bizarre Roger Rabbit game that was half Sorry/half Clue. This thing has you collecting constructs to defeat Parallax. It comes with dice, stand up characters, a ring, construct cards, surprise attack cards, and that weird lantern setup in the middle of the board that has to do something. Again if I had the appropriately aged kid, we’d be totally playing this.

These items are really just the tip of the iceberg. After all the shelves will be flooded with action figures, shirts, sleeping bags, back packs, lunch boxes, and on and on and on. But for now, I’m done with the Green Lantern merchandise. Besides I’m not sure how much more Brandon will be able to take before he snaps.
Posted by Ken O at 7:00 AM