The dust has settled; the booze has been drunk. All that is left are sore feet and debit card receipts. That’s right Megacon 2011 is over. There is always a short depression after a convention. All the adrenaline and excitement have worn off and your friends that are scattered across the country have gone back to their homes. The next three days are all going to be Megacon related. Expect interviews today and tomorrow; Thursday will be something else entirely. 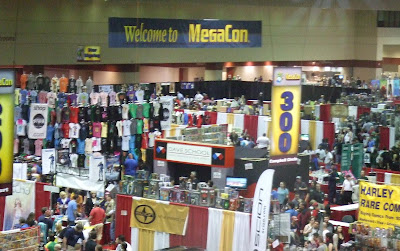 Before we get started I suppose I should give some explanation of what you’re about to read. If you’re looking for news on the Aquaman announcement or the Rob Granito smackdowns, look elsewhere. The interviews that are about to follow consist of three questions. They relate directly to the holy trinity of That F’ing Monkey; Comics, Games, Booze.

Why would I ask comic creators about video games and drinking? Quite frankly I found it fascinating. So after spending the day being asked why in issue 214 of Captain Floppy Pants, the Ass-Chap Marauder had red suspenders instead of orange; I came up and asked something even more inane. I think I got some really good reactions and a big thank you goes out to everyone I got to talk to.

The questions were the same for everyone. Comics: “What do you have coming out?” Games: “Are you a gamer, if so what are you currently playing?” Booze: “You walk into a bar, what do you order?” Also, none of the responses are direct quotes. I’m definitely learning here, next time I’ll bring some kind of recorder so I can give you verbatims. Hopefully this is interesting to someone other then me, let me know if you liked them.


Tim Townsend
1. Comics: Current X-Men story arc (issues 7-10), 2 issues of Avengers.
2. Games: None currently. Tim was a huge World of Warcraft player until his account was hacked twice. After receiving little support from Blizzard he quit.
3. Booze: Wine or after talking to the bartender seeing if they have anything they recommend.


Jimmy Palmiotti
1. Comics: Tattered Man, Jonah Hex, Trailblazer in June. (A side note on this one, we’ve already give Jonah a ton of love here, but Trailblazer is a time travel western. Yeah, we’ll be talking about that when it comes out.)
2. Games: A WWII first person shooter, possibly one of the Call of Duty games.
3. Booze: Always checks what is on tap. A fan of light pilsners.


Rev Dave Johnson
1. Comics: Covers for Spaceman, BPRD, Abe Sapian mini, and a Lobster Johnson mini. And the coolest bit; his art will be used in a Venture Brothers episode that is set up like an episode of Behind the Music. I got a peak at some of it; and it is just as awesome as it sounds.
2. Games: Likes to wait until games are super cheap. He just finished the first Bioshock two months ago.
3. Booze: A big fan of Hefeweizens (Blue Moon, Shocktop, etc) and Pickle Back a shot consisting of pickle juice and whiskey.


Frank Tieri
1. Comics: Writer for Marvel vs Capcom 3, Wolverine and Hercules mini, a story in the Captain America 70th anniversary, and the Fear Itself Thunderbolts issue.
2. Games: Is currently writing and working on two different games he can’t talk about. Needless to say he’s jumped right into the games industry.
3. Booze: Beer and Jagermeister are standbys. Used to be a big fan of 7&7s and once in a while likes a flavored vodka drink.


That’s it for part one of the Megacon review. Come back tomorrow for the second half of the interviews and Thursday for a Megacon themed Hangover Thursday. Just so you know I wasn’t alone in this madness, my wife was a big help keeping this all straight.  So I'm going to use this space to thank her.
Posted by Ken O at 1:21 PM